Politico's Mark Caputo is reporting tonight that Democratic National Committee Chairwoman Debbie Wasserman Schultz "offered to change her position on medical marijuana if a major Florida donor recanted his withering criticism of her."

Now that there's a serious charge that the congresswoman pays more attention to those who shout the loudest instead of sticking to whatever core principles she claims to have, it will be quite interesting to see if this story gets wide circulation, or if, as has been the case many other negative stories about Democrats, it stays buried at Politico.

Caputo's report earlier this evening relayed allegations are damning, and apparently supported by an email trail. Oddly, the reporter saved the specific details of how it all went down for his final six paragraphs (bolds are mine): 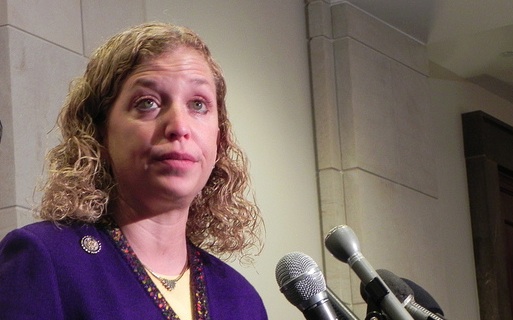 Democratic National Committee Chair Debbie Wasserman Schultz’s office offered to change her position on medical marijuana if a major Florida donor recanted his withering criticism of her, according to emails obtained by POLITICO.

The proposal to Orlando trial lawyer John Morgan was straightforward: retract critical statements he made to a reporter in return for Wasserman Schultz publicly backing his cannabis initiative that she had trashed just months earlier. Morgan declined the offer with a sharp email reply sent to a go-between, who described the congresswoman as being in a “tizzy.”

The congresswoman’s more recent dispute with Morgan unfolded Wednesday afternoon. POLITICO sent an email at 3:50 p.m. to Wasserman Schultz’s office seeking comment on criticisms from Morgan and other medical marijuana advocates. Three minutes later, an adviser replied that she had no comment.

In the meantime, Wasserman Schultz’s office sprung into action. Her team reached out to the campaign manager for the medical marijuana initiative — Ben Pollara, a top Democratic fundraiser and consultant in Miami — and offered him a deal.

Pollara, who refused to comment, detailed the offer in an email to Morgan a few hours later, the donor said, with the subject line: “DWS.”

“In a tizzy over this politico story. Saying she might be willing to support new amendment. Any chance you’ll retract your statement,” Pollara wrote.

Morgan responded about two hours later in his email calling her a “bully.”

“Actions have consequences,” Morgan told POLITICO on Thursday. “Her days of pushing people around are over.”

So in Debbie-world, if someone perceived as important says something bad about you, you try to put an end their criticism by saying you'll support their pet issue if they will just stifle themselves.

Who knew that turning a big-name Democratic congressperson was so easy?

Better question, to be answered over the next 24 hours or so: will the rest of America learn about this, or will the story stay buried at the Politico?

This matter is especially pertinent because, as Caputo noted, Schultz is considering running for the U.S. Senate in Florida if the GOP's Marco Rubio chooses to take a shot at the presidency.