Another Keynesian Fail: Japan 'Unexpectedly' Falls Into Another Recession

There were several more of those infamous "U-word" ("unexpectedly") sightings yesterday in the business press, as Japan — to the surprise of no one who has successfully avoided the Keynesian koolaid — reported that its economy shrank for the second quarter in a row, officially falling into yet another recession.

The U-word hit the trifecta, appearing in reports at the Associated Press, Bloomberg and Reuters. 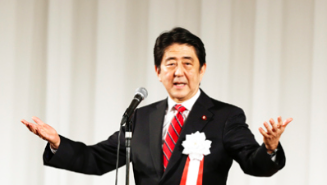 The Keynesian clowns who are running economic policy in the government of Prime Minister Shinzo Abe, and who describe their program as "Abenomics," really thought that raising the country's national sales tax by 60 percent from 5 percent to 8 percent would cause only one quarter of pain, that the country would return to a growth trajectory after that, and that it could handle yet another planned steep sales tax increase.

Instead, here's what happened:

They never learn. That goes for policymakers, and for the press which covers them.

On October 7 — that is, six weeks ago — the contrarian blog Zero Hedge noted that Japan's central authorities had already essentially admitted that the country was in a recession. Monday's news should not have been "unexpected."

The AP reported that fiscal and monetary policymakers in the Land of the Rising Sun, aka the Land of the Zombie Economy, are just doing more of the same, while somehow expecting different results:

On Oct. 31, (Bank of Japan Gov. Haruhiko) Kuroda announced the central bank would step up its asset purchases, accelerating Japan's "quantitative easing" just as the U.S. was winding its QE down. (Note: The U.S. hasn't "wound down" any of its QE; it has merely stopped creating more money out thin air. — Ed.)

On the same day, the government announced it would shift a large share of the public pension fund's investments out of government bonds and into higher yielding but riskier shares.

... Abe is planning extra stimulus worth about 3 trillion yen to 4 trillion yen ($26 billion to $35 billion) that could include subsidies to low-income families and help for smaller companies squeezed by rising costs for imported energy and materials, Nishioka said.

Bloomberg, while noting that this is Japan's fourth recession since 2008, characterized the actions just described as "taking steps to shore up growth for the coming year." Uh, folks, you need to have growth to shore it up.

Reuters also reported that more of the same is in store, but apparently not as much as those in favor of eternal stimulus would like to see:

Economy Minister Akira Amari said some economic stimulus was likely, but added it would be hard to craft an exceptionally big package because of the need for fiscal discipline.

Japan's "fiscal discipline" of the last 20 years has taken its government debt to a level that is over 200 percent of the nation's GDP.

Abe and his government are so lacking in political confidence that they are calling a snap election in December to keep opposition parties from viably coalescing in time.

Meanwhile, the Keynesian calamity continues, and the press only seems capable of carrying predictions that won't come true followed by befuddlement when they don't.

Four years ago, a New York Times report on the country's declining living standards and "disheartened" people burned through 2,500 words without once using the word "stimulus." Yesterday's wire coverage demonstrates that after over two decades of failed Keynesianism, as far as the press is concerned, it's still not Keynesianism's fault.