Seconds after Benjamin Netanyahu ended his speech on Tuesday to Congress, the journalists at MSNBC began attacking it. Chris Matthews appeared and sneered that the Israeli prime minister "never mentioned the real world" in his address. The Hardball host insisted that Iraq was "the war [Netanyahu] talked us into."  The journalist berated, "The reason Baghdad is under control of the Shia and under the control of Iran is he pushed that! And he never mentioned that! So, being a hawk all the time takes away some of your credibility, always being a hawk."

Matthews cynically dismissed Netanyahu's address: "I don't know what Bibi Netanyahu's plan is. Of course, he's up for re-election. This will help him." MSNBC anchor Tamron Hall then brought on liberal Congressman Lloyd Doggett, who boycotted the speech. According to Doggett, the address was a "desperate attempt to get re-elected in two weeks."

The congressman added, "It was a pep rally for that re-election." 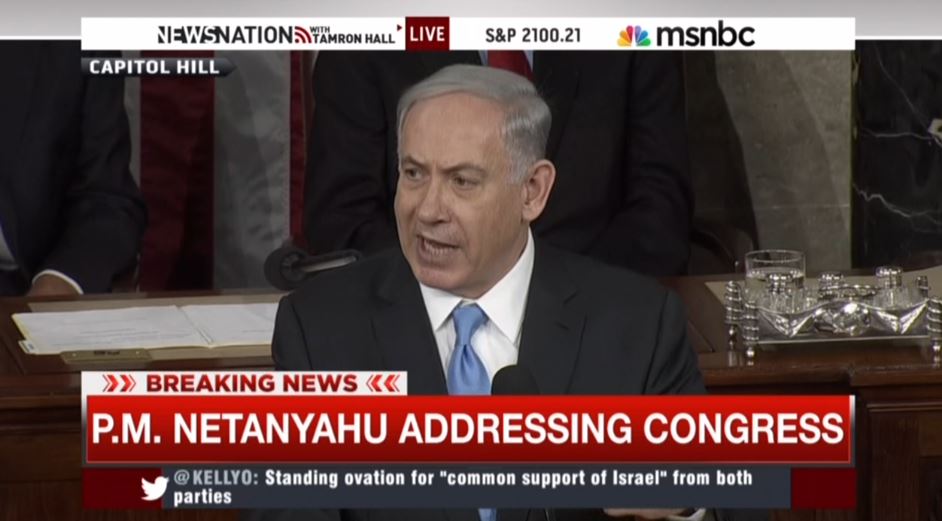 CHRIS MATTHEWS: He's very good. He was very good at charming the Democrats as well as the Republicans with the Old Testament, references to the story of Ester, Queen Ester, we grew up and powerfully bringing back the story of the Holocaust with Elie Wiesel there, the survivor and hero and keeping history alive with regard to the Holocaust. He did all of that right except in the end, I don't think he ever explained his alternative.

He said no deal is better than a bad deal. But what is his deal? What does he want us to do except reject what the president is offering? So far, the President is the only game in town in terms of delaying the nuclearization or weaponization of Iran. There is no other game on the table here. I did think there were two darn many smiles in that room tonight, today. Too many people seeing this as a political game. The camera would catch them. Why were they smiling? This is not a game. This is about a threat to Israel. It's about a threat to us and what do we do about it? As I said, the President has a plan. I don't know what Bibi Netanyahu's plan is. Of course, he's up for re-election. This will help him.

TAMRON HALL: And to your point, the alternative here was never laid out in great detail, the potential plan that Benjamin Netanyahu says is out there. In fact, he even refered to Google. He says the plan does not block the path to the bomb. It paves a way for the 36-year regime that will not change. But, Chris, he did discuss sanctions but also noted under the sanctions in place now, there is more than enough money come into that regime in Iran.

MATTHEWS: Sure. And how long can we sustain – I'm sorry. And how long can we sustain these sanctions? What country in the world -- he didn't mention a single one that was willing to sustain tougher sanctions or to sustain these sanctions. He never mentioned the real world out there. By the way, never ever forget he was the one -- he talked about the countries in which Iran has influence, Baghdad, the war he talked us into. The reason Baghdad is under control of the Shia and under the control of Iran is he pushed that! And he never mentioned that! So, being a hawk all the time takes away some of your credibility, always being a hawk

TAMRON HALL: The applause, the ovations, but what I think what Chris and others are pointing out, where is the scrutiny? What is the alternative?

REP. LLOYD DOGGETT: I think it was a strong speech. I think the prime minister accomplished his first objective which was to appear strong in what he described as the greatest legislative body in the world to help his desperate attempt to get re-elected in two weeks. It was a pep rally for that re-election.