Good Morning America news reader Amy Robach on Friday mocked Republican James Inhofe as "bizarre" for a global warming speech he gave on the Senate floor. Robach described, "And a bizarre scene in Washington. One senator used the recent snow to bolster his argument about climate change."

Inhofe held up a snowball to note the unusually cold February that the east cost has suffered through. Tossing the snowball, he joked, "Here, Mr. President. Catch this." ABC has a history with condescending coverage on this issue. On April 23, 2012, reporter Bill Blakemore derided climate change skeptics as "denialists" and called for more alarmist advocacy.

A Washington Post profile of Inhofe in January also smeared the conservative as a "climate change denier."

CBS This Morning on Friday managed to cover Inhofe's speech without name calling. Co-host Norah O'Donnell recounted, "Oklahoma Senator Jim Inhofe brought in a snowball onto the Senate floor in an attempt to argue against global warming."

A transcript of the February 27 segment is below: 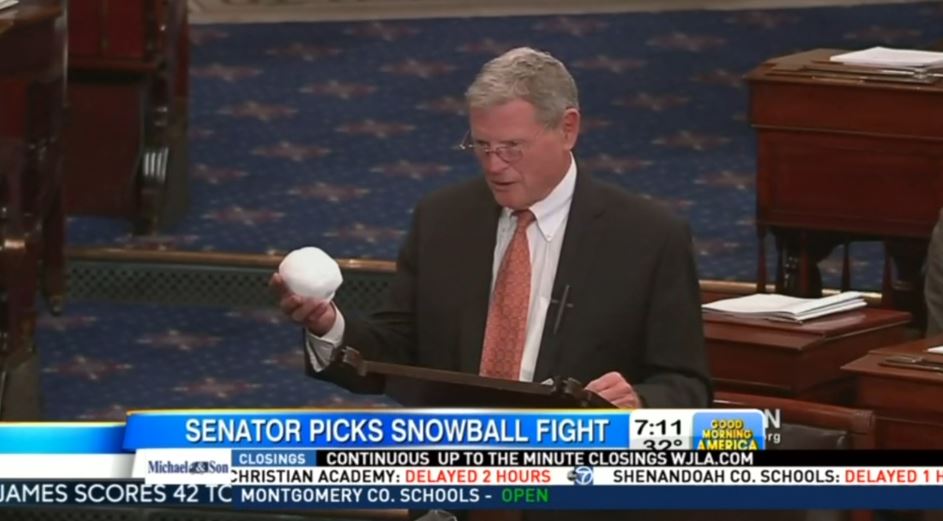 AMY ROBACH: And a bizarre scene in Washington. One senator used the recent snow to bolster his argument about climate change. Republican James Inhofe highlighted a government report that found last year was the warmest on record. Then, he used a prop to demonstrate how cold it's been lately.

SENATOR JAMES INHOFE: It's a snowball, and that -- just from outside here. So, it's very, very cold out, very unseasonable. So, here, Mr. President, catch this.

ROBACH: Inhofe acknowledges the Earth's climate is changing but doesn't believe humans are to blame.