After playing clips of Aiken and incumbent Renee Elmers, reporter Reena Ninan cheered, "Aiken, considered the long-time underdog, seemingly holding his own." It wasn't until the very end of the segment that Nina hinted at how badly the Democrat is doing. She allowed, "But with the election a month away, the race to the polls still might be an uphill battle." In fact, Real Clear Politics labeled the North Carolina district "safe GOP" and found Aiken to be trailing by eight points. 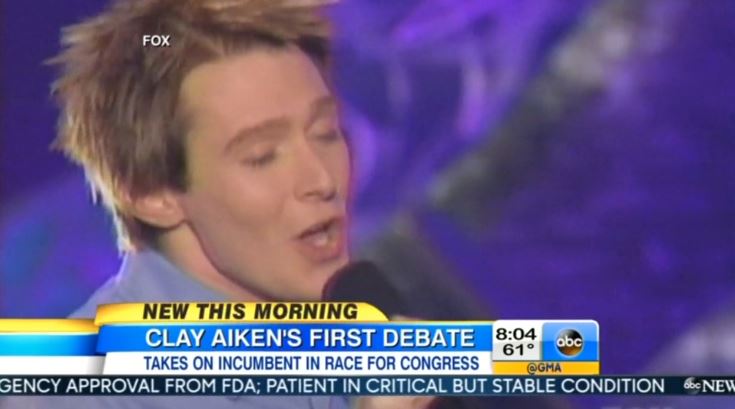 On May 7, after the celebrity edged out his Democratic primary opponent by a few hundred votes, Good Morning America's Lara Spencer touted, "Clay Aiken in the public eye for almost a decade,  making headlines for his songs, his personal life and now a run at the United States Congress"

NBC got into the act on May 2. Kelly O'Donnell heralded: "From pop singer to politician."

On Tuesday, Rick Klein insisted that "Aiken's made the best out of a tough situation." Nowhere in the segment did Ninan note that Aiken is racing away from Barack Obama. The New York Times's Jim Rutenberg related this exchange: 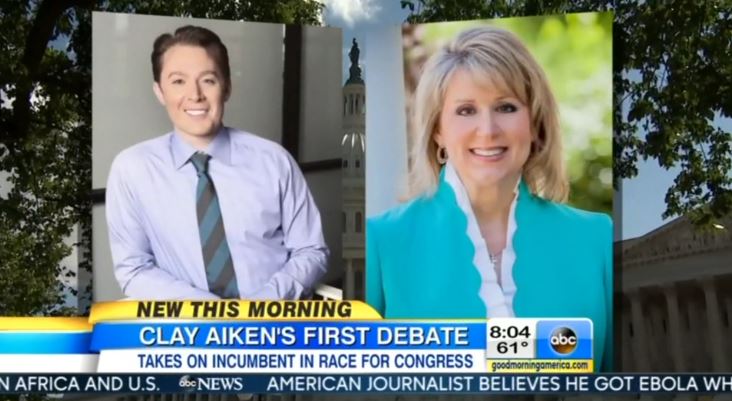 Do you think Obama has been a good president?

I think every president is on a sliding scale somewhere. There are certainly areas where I disagree with him.

Do you want him to come campaign for you?

ABC's Good Morning America can barely be bothered to cover politics. Yet, the morning show has devoted three segments to a political candidate who will likely lose badly. GMA provides proof that a program can be both incredibly superficial and liberally biased at the same time.

A transcript of the October 7 segment is below: 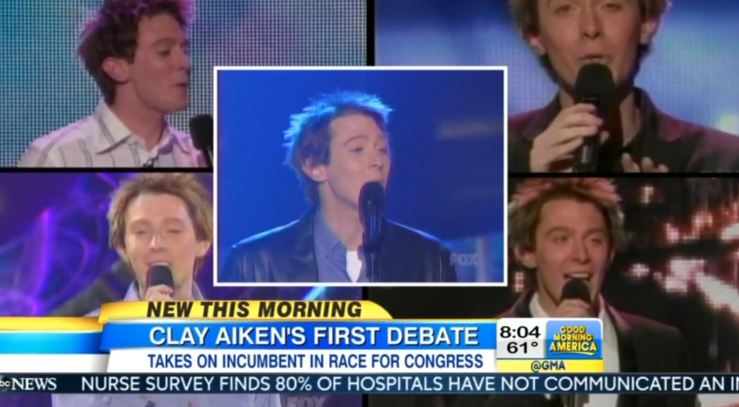 RENEE ELLMERS: Mr. Aiken is incorrect in that.

NINAN: Both accusing the other's party for the dysfunction in Washington.

ELLMERS: This Obama-Aiken economy is just killing us.

NINAN: Elmer's even taking a jab at the former idol's celebrity status.

ELLMERS: It's almost as if as an entertainer you believe you can go in with a song and dance and, you know, change the minds of our military leaders.

NINAN: Something she's done in the past.

ELLMERS: He didn't even fare all that well. He was runner up. So –

NINAN: Aiken, considered the long-time underdog, seemingly holding his own.

AIKEN: But the most embarrassing reality show right now in the country is Congress.

RICK KLEIN (ABC News political director): This was always going to be a tough race. A Democrat in this district, in this kind of year. Clay Aiken's made the best out of a tough situation.

NINAN: But with the election a month away, the race to the polls might still be an uphill battle. For Good Morning America Reena Ninan, ABC News, New York.