A family spokesman for an American who was beheaded in Iraq appeared on CNN, Monday, and slammed the Obama administration's handling of the death. Barak Barfi accused the White House of playing a "game of bureaucratic infighting and Jim [Foley] and Steve [Sotloff] are pawns in that game and that's not fair."

On Tuesday, ABC's Good Morning America and NBC's Today showed no interest in the condemnation of the Obama administration. CBS This Morning allowed a sentence. This is quite a change from the journalistic focus on Cindy Sheehan during the Bush administration. Talking to Anderson Cooper, Barfi had a warning for Obama: "If there continues to be leaks, the Sotloff family will have to speak out to set the record straight." [MP3 audio here.]

The spokesman defined the relationship between the family and the White House as "very strained." Barfi added, "Once Steve appeared in that video, the Sotloff family made one simple request of the administration and they were rebuffed on that." He declined to explain what the request was, citing Americans currently being held hostage.

Appealing to the administration to do more, Barfi lobbied: 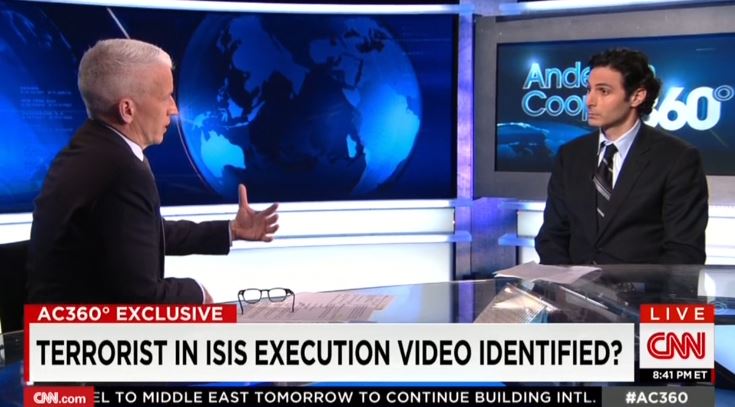 BARFI: Anderson, when your view into the largest and most powerful government in the world is two FBI agents, that's simply not enough. For 80 or 90 percent of the interaction you have with the government, that's not enough. The administration could have done more. They could have helped us. They could have seen them through. These are people of modest means.

CBS This Morning's Charlie Rose played clips of Barfi talking about unrelated elements. Rose only allowed this brief remark about the White House: "The family says its relationship with the Obama administration is, quote, 'strained.'"

An August 24, 2009 Media Reality Check looked back at media coverage of Cindy Sheehan:

Katie Couric, for instance, showcased Sheehan at the top of NBC’s Today show: “A mother’s vigil. Her son died in Iraq. Now this woman is camping outside the Bushes’ Texas ranch and demanding a meeting with the President today, Monday, August 8th, 2005.”

The next day, Gibson, then co-host of ABC’s morning show, led by touting: “Standing her ground. She lost her son in Iraq, she opposes the war, now she’s camped out at President Bush’s ranch and says she won’t leave until he meets with her. An exclusive interview on Good Morning America.”

The following evening, CBS’s Bill Plante noted the obvious as he provided more publicity: “She’s gotten a lot of media attention by camping out on the road that leads to the President’s ranch.” Anchor Bob Schieffer ruminated: “I wonder why the President doesn’t meet with her?”

A partial transcript of the September 8 Anderson Cooper 360 segment is below: 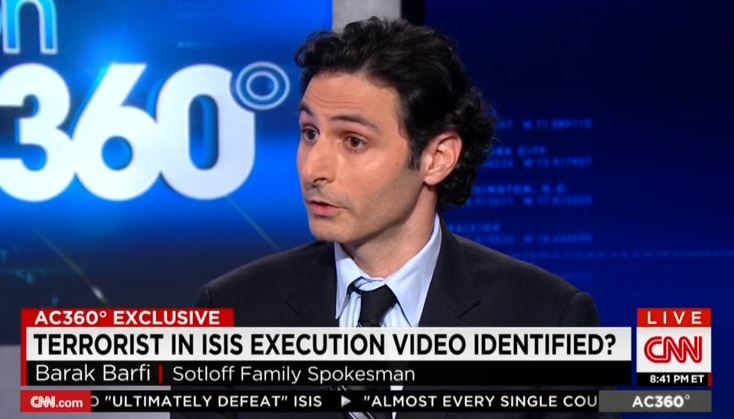 ANDERSON COOPER: You've heard the administrations response to all of these, what do you make of it from your vantage point?

BARAK BARFI: The administration has made a number of inaccurate statements to say -- they have said that their families have been consistently and regularly informed, that is not true. I speak now only from the Sotloff family. I can't speak for the other families.

They said that these hostages were moved frequently. We know that for most of the beginning of this part of this year, they were stationary. We know that the intelligence community and the White House are enmeshed in the larger game of bureaucratic infighting and Jim and Steve are pawns in that game and that's not fair and if there continues to be leaks, the Sotloff family will have to speak out to set the record straight.

COOPER: What do you mean that they were pawns? Can you say more?

BARFI: Well, I'll just give you one example. People now are talking about the torture that some of these hostages suffered. People talked about specifically some of the tortures that Jim suffered and that's just not fair to his family. They need time to heal.

And there was an article last week in the Wall Street Journal basically revealing some of the details that the raid, the Pentagon and the intelligence community were pushing back against the White House and saying it was their fault that they didn't provide the surveillance necessarily to find the hostages.

BARFI: Anderson, the relationship within the administration and the Sotloff family was very strained --

BARFI: Yes. We do not believe that they gave us a cooperation we need. And the Sotloff -- Once Steve appeared in that video, the Sotloff family made one simple request of the administration and they were rebuffed on that.

COOPER: Can you say what the request was?

BARFI: I can't say that because I have to think about protecting the other hostages inside.

COOPER: The White House has just put out a statement. I just want to read that to you. They say, "We understand the very real pain the Sotloff family is feeling at this time. Our thoughts and our prayers are with them as they grieve Steven's loss." They go on to say, "We condemn the murders of Steven and Jim Foley and we are remain committed to bringing the perpetrators of these crimes to justice." Do you have any response for that or?

BARFI: Anderson, when your view into the largest and most powerful government in the world is two FBI agents, that's simply not enough. For 80 or 90 percent of the interaction you have with the government, that's not enough.