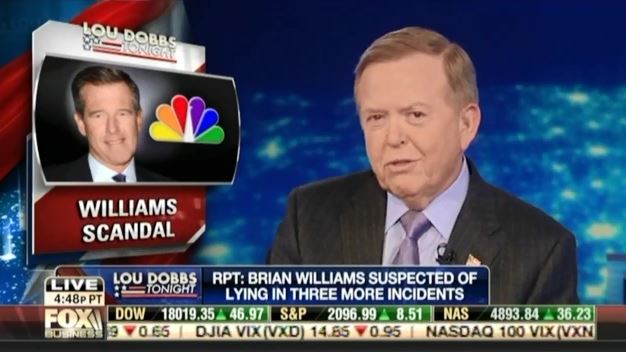 There was a telling media moment on Friday’s Lou Dobbs Tonight, as the Fox Business host dissolved into a fit of uncontrollable laughter as he recounted the latest questionable claims from suspended NBC Nightly News anchor Brian Williams.

By the time Dobbs had finished reading the 30-second update, he was laughing so hard he could barely speak. The spontaneous giggles say as much as anything about how Williams’s pompous persona has deflated over the past two weeks, as the once-top rated anchor has sunk to Commander McBragg levels of incredibility.

Here’s the video followed by the relevant transcript (but in this case, it’s all about the video):

LOU DOBBS: The Brian Williams scandal isn’t getting a lot better. The suspended NBC News anchor is now accused of stretching the truth, or outright lying, in three other incidents.

He claims he flew into Baghdad with the Navy Seal Team 6 in 2003, but Fox News has learned that likely didn’t happen since the unit that killed Osama bin Laden does not, and never has, embedded journalists, thinking that would be — and I think it’s supportable reasoning — a bad idea.

Williams claims he was at Berlin’s Brandenberg Gate the night the wall came down, but he apparently got there just a day later.

And Williams claims he met Pope John Paul II in 1979, but it’s unclear how much interaction he had with the Pope, because Williams’s retelling of the event has differed slightly over the years.