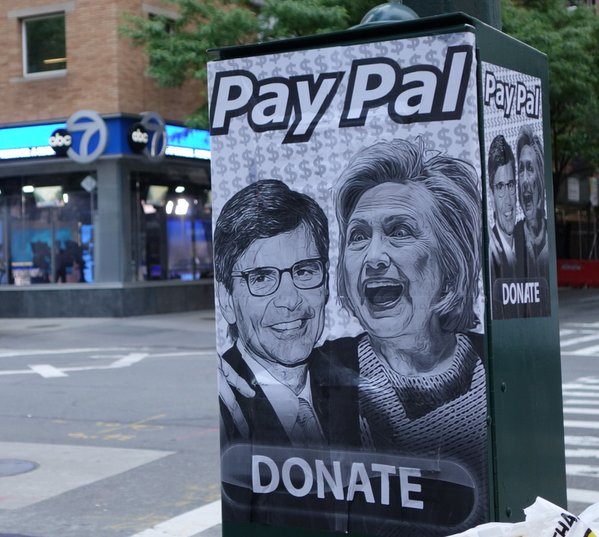 One fringe benefit of the George Stephanopoulos Clinton Foundation scandal in which ABC's This Week host failed to disclose that he donated $75,000 (plus lots of time) to that organization while interviewing "Clinton Cash" author Peter Schweizer  is that it has inspired some really hilarious street art. The poster art appears to be the work of the conservative street artist who goes by the name of "Sabo." Not only was it just the art that served as comedy relief but also where it was located as revealed in a tweet this morning by the Weekly Standard senior writer, Mark Hemingway.

Yes, that's right. As you can see in the background of the photo, the posters were placed right near the studios of Good Morning America.

Sabo first came to attention last year when the liberal streets of Los Angeles were plastered with posters of his rendition of a heavily tattooed Ted Cruz smoking a cigarette. He made a statement to Reason about the importance of art in politics:

"Somewhere down the line Republicans forgot the importance of art," says "Sabo," the conservative street artist best-known for his guerilla poster of Ted Cruz as a tattooed smoker and Nancy Pelosi on all fours a la Miley Cyrus.

Exit question: How much would Sabo's latest street art signed by either George Stephanopoulos or Hillary Clinton sell for on eBay?