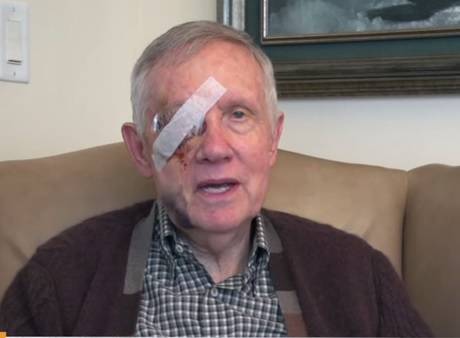 It has been three months since Senate Minority Leader Harry Reid's exercise equipment accident story and he remains blind in his injured eye. So when will Reid sue the exercise equipment company or even mention the brand name? So far nothing solid on this from Reid and the mainstream media continues to remain on incurious mode.

This was particularly noticebable last week when Reid announced that he won't be seeking re-relection. Speculation again heated up on talk radio and in the blogosphere about this accident but from the MSM.....the sounds of silence. Among those taking note of the strange circumstances of Reid's accident were Rush Limbaugh and John Hinderaker of Powerline who wrote two articles on this subject. In the large ranks of the strangely incurious is Michael McAuliff of the Huffington Post who back in January noted that Harry Reid Won't Rule Out Suing Exercise Equipment Maker Over His Injury:

WASHINGTON -- Senate Minority Leader Harry Reid (D-Nev.) on Thursday made his first public media appearance since an exercise mishap left him with a severely injured eye and four broken ribs.

Reid had been working out with resistance bands in his new home earlier this month when one snapped, injuring his right eye and flinging him into a file cabinet, he said.

The Nevada Democrat said he expected to be back to full speed soon, and that he planned to run for re-election. But while he was certain about his electoral plans, he hedged on a question about whether he'd take the manufacturer of the exercise gear to court.

"Let's say if I were, I wouldn't be broadcasting that here," Reid said.

Asked later if he knew the maker of the product and whether he thought it was defective, Reid answered: "Well, we have it, and we'll find out."

Despite the fact that Reid remains blind in his injured eye, still no lawsuit announced by Reid. So will there be a lawsuit in the future? We don't know because McAuliffe followed up on this and his MSM colleagues haven't dared to ask. In fact, Reid still hasn't named the brand of exercise equipment. Wouldn't he want to warn others about it? Again no questioning about this from the MSM but on Friday, after Reid announced his retirment, Rush Limbaugh had some interesting observations about the accident Reid supposedly suffered:

What does it look like happened to Reid? He looks like he has been in a fight, and not with an elastic band. Some are speculating that he had a run-in with Las Vegas underworld characters. There is zero evidence for that. And I might be completely wrong: perhaps Reid is an unsteady, elderly gentleman with precarious balance, and a snapping band caused him to fall with what seems like extraordinary force. But I doubt it. I think it is questionable whether we are being told the truth about what happened to Harry Reid.

And don't expect the MSM to seek out the truth. In fact, Hinderaker followed up with a second article on just that topic:

When a guy shows up at a Las Vegas emergency room on New Year’s Day with severe facial injuries and broken ribs, and gives as an explanation the functional equivalent of “I walked into a doorknob,” it isn’t hard to guess that he ran afoul of mobsters. Yet the national press has studiously averted its eyes from Reid’s condition, and has refused to investigate the cause of his injuries. To my knowledge, every Washington reporter has at least pretended to believe Reid’s story, and none, as far as I can tell, has inquired further.

...What happened to Reid is not just a matter of curiosity. Everyone knows that the Reid family has gotten rich, even though Reid has spent his entire career as a public employee. It is known that a considerable part of his fortune came from being cut in on sweetheart Las Vegas land deals that included at least one person associated with organized crime as a principal. Was the Senate Majority Leader in the pocket of the Mafia? That seems like a question worth exploring, and yet, to my knowledge, not a single investigative reporter has chosen to look into the matter, even with the obvious clue of Reid’s face in front of them.

The deliberate blindness of Democratic Party reporters hasn’t stopped people from speculating about what really happened to Harry Reid, but so far, at least, it has prevented the story from exploding into a major scandal.

An oatmeal cookie to the first MSM reporter who dares to investigate this matter. You can even earn that oatmeal cookie by simply asking Harry Reid for the brand name of that exercise equipment that injured his eye, smashed his face, and broke several ribs. Hey, Michael McAuliffe! Wouldn't like to earn yourself a nice tasty oatmeal cookie by following up on the unanswered questions in your article?