In May, as noted at NewsBusters, Seattle Mayor Ed Murray ended his run for reelection in the wake of "mounting allegations that he sexually abused underage boys in the 1980s."

On Sunday, the Seattle Times reported that records previously thought destroyed revealed that "An Oregon child-welfare investigator concluded" that" Murray "sexually abused his foster son in the early 1980s." The Times, as well as related wire reports from the Associated Press and Reuters, have only told readers that Murray is a Democrat in very late paragraphs.

Specifically, a newly surfaced May 20, 1984 Multnomah County, Oregon social services document assessing Murray and his relationship with foster child Jeff Simpson contained the following conclusion (bolds are mine throughout this post): 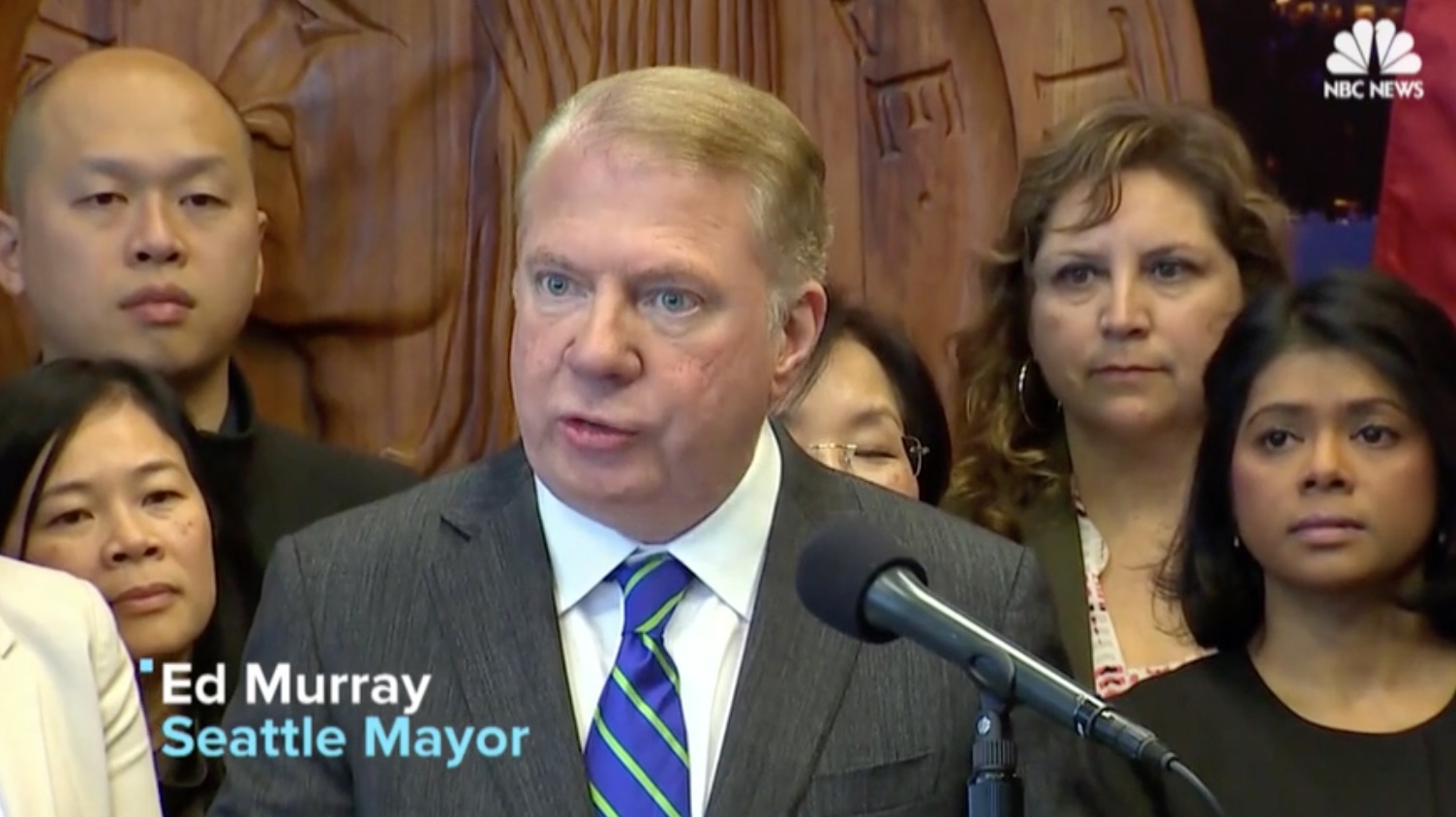 In the professional judgement of this caseworker who has interviewed numerous children of all ages and of all levels of emotional disturbance regarding sexual abuse, Jeff Simpson has been sexually abused by ... Edward Murray.

A separate document reveals that the county's District Attorney considered taking the case to a grand jury for prosecution, but decided against doing so:

It was Jeff’s emotional instability, history of manipulative behavior and the fact that he has again run away and made himself unavailable that forced my decision.

... However, this in no way means that the District Attorney's Office has decided that Jeff's allegations are not true.

Reporters Lewis Kamb and Jim Brunner at the Seattle Times noted the significance of these documents (link is in original):

The newly obtained records, previously thought destroyed, provide the clearest picture yet of the investigation of Murray, then a paralegal who had worked as a counselor to Simpson and other troubled children.

The documents, released to The Seattle Times this month by Oregon’s Department of Human Services, also contradict public statements in recent months by Murray and his lawyer contending investigators had debunked Simpson’s allegations at the time as false.

... Oregon officials previously said records of the investigation had been purged, but located them in April under a newer computer-tracking system. In releasing the typically private information to The Times, that state cited, in part, a provision of public-records law that allows disclosure “to protect children from abuse and neglect.”

The finding by CPS supporting Simpson — who had been abandoned as an infant and later lived under Murray’s care for nearly a year and a half as a teenager — prompted Oregon child-welfare officials to decide that Murray should never again be a foster parent, a June 1984 report shows.

Murray has been accused of sexual abuse by several others who were then teenagers. One of them, Delvonn Heckard, withdrew the lawsuit he had filed against Murray in June while promising that he would refile the suit next year. The ever-ambitious Murray jumped on this development, stating that he would not rule out competing in this year's election after all as a write-in candidate.

One might think that Sunday's Seattle Times story might turn the tables, and lead those who have supported him and city residents in general to question whether he should be allowed to serve the rest of his term. But this is Seattle, where, as the New York Times reported in May shortly after Murray announced that he would not seek reelection, attitudes are more, well, "complicated":

In the gay, lesbian and transgender community that has largely worshiped Mr. Murray — and especially in its heart, Capitol Hill, where Mr. Murray and his husband, Michael Shiosaki, have lived for decades — a pall of uncertainty and sadness has descended.

“It’s such a complicated sadness,” said Monisha Harrell, the chairwoman at Equal Rights Washington, a statewide advocacy group that worked closely with Mr. Murray in promoting the Anderson-Murray Anti-Discrimination Law, which was passed in 2006.

“There’s a sadness for the loss of a leader who has put himself on the front line of many of these causes that have been so important to us,” she said.

Other people who live or work in Capitol Hill, where many of the crosswalks are painted in gay-pride rainbows, said they were struggling with what to think, because no matter what is decided in court, many young gay, lesbian and transgender people are victims of crime, exploitation and abuse.

Note the complete absence of anything resembling "anger." No form of that word appears in that New York Times story.

Perhaps this inability to get genuinely angry at a homosexual man who can no longer deny that credible accusations of abuse against him exist has caused the gay-friendly press to be reluctant to tag Murray as a Democrat. That would be consistent with the Seattle-area press's clear reluctance, as seen in an April NewsBusters post, to report specific, credible rumors about Murray's past when they first surfaced in 2008.

Regardless of the reason, the reluctance to apply a party label to Murray is obvious:

Unfortunately for Murray, the latest developments support the notion that, at least earlier in his life, he may have fit that stereotype. That's apparently unfortunate for Democrats as well — which would seem to explain the left-supporting press's reluctance and delay in applying the party tag to him.