Records are supposed to be newsworthy, right? But in his Thursday coverage of the federal government's June Monthly Treasury statement, Associated Press reporter Martin Crutsinger only told readers that the deficit for the month was $90 billion.

He did not disclose receipts or outlays. Why? Because if he had, he would have had to tell readers that the government spent an all-time record $429 billion during the month.

Here are the first two paragraphs in Crutsinger's dispatch, followed by two later paragraphs as the reporter transitioned into discussions of projected full fiscal-year results by the Congressional Budget Office (bolds are mine):

The federal budget deficit rose sharply in June compared to a year ago, although much of the increase reflected calendar quirks.

The Treasury Department said Thursday the June deficit totaled $90.2 billion compared to a surplus in June 2016 of $6.3 billion. However, outlays grew by $39 billion this year because benefit payments that normally would have been distributed in July were made in June since July 1 fell on a Saturday.

... The Congressional Budget Office released an updated forecast last month that projected the deficit for this year will total $693 billion. That represented a sharp increase of $134 billion from CBO’s January forecast. The deficit in 2016 totaled $585.6 billion.

CBO blamed much of this year’s increase on the fact that the government is collecting less money in tax revenue this year than had been expected.

So if that's true, one would expect that revenues are relatively flat, and that spending growth hasn't been that significant. The next paragraph shows that the latter is certainly not the case: 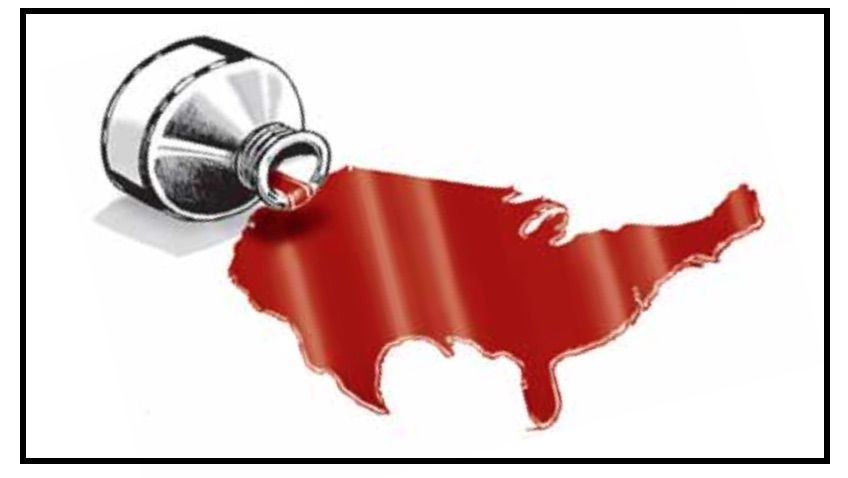 For this budget year, which began Oct. 1, revenues total $2.51 trillion, up 1.6 percent from the same eight months last year. Outlays have risen 5.7 percent during the same period to $3 trillion.

This may be quibbling, but it's interesting that Crutsinger took "revenues" (better known as "collections" to people who realize that the government produces very little which generates genuine revenues, i.e., sales) to decimal points, while leaving outlays, aka spending, which is really $3.03 trillion, rounded down (of course) to zero decimal points.

Far more importantly, Crutsinger failed to report that June spending was a shocking $428.89 billion, blowing away the old record of $392.82 billion set in March. Even after adjusting out the $39 billion timing difference the AP reporter identified, the net of nearly $390 billion is still disgraceful. It would appear plausible to contend that Obama era holdovers and longtime deep-state bureaucrats are emptying their budgets and allocations in every conceivable way they can on the assumption that executive branch fiscal discipline might eventually put an end to their spending sprees (or at least one would hope).

The $3.03 trillion in spending, if continued at the same rate through the end of the September 30 fiscal year, annualizes to $4.04 trillion. That number would top the previous full-year record of $3.85 trillion spent in fiscal 2016 by 5.0 percent. Total spending during fiscal 2007, the last time the nation had a Republican-passed budget signed by a Republican president, was $2.73 trillion. This year's annualized result, if it comes to pass, would be 48 percent higher.

That spending record is why a paragraph like the following one from a separate AP report by Andrew Taylor on Friday is such a sick joke:

The White House budget office also says the deficit for the 2018 budget year that starts on Oct. 1 will increase by $149 billion to $589 billion. But lawmakers are already working on spending bills that promise to boost that number even higher by adding to Trump’s Pentagon proposal and ignoring many of Trump’s cuts to domestic programs.

As has been noted in several NewsBusters posts in recent weeks as well as through the years, it's the usual case that what AP calls "cuts" are actually "reductions in projected spending increases." Spending continues its upward trajectory, just not as quickly — and AP continues downplaying the continuation of those actual increases.