AP, After Another Dem Loses: Montana House Race Was 'Not So Much' a 'Trump Test'

Longtime media bias observers know that if a Democrat wins a single special election race for national office during a Republican presidential administration, the press will say it's evidence that the nation's voters have changed their minds about which party should occupy the White House. If the Democrat loses ... well, in the pre-Internet era, the national press would pretend that the race never happened.

These days, they instead have to come up with excuses, which are usually pathetic. The Associated Press engaged in such an exercise Friday morning after Republican Greg Gianforte defeated Democrat Rob Quist for Montana's single US House seat.

You see, per AP, Quist was a "weak" candidate. Fine, but if that's the case, why was he the best Big Sky Country Democrats had to offer against a guy who couldn't win the Governor's office last November despite Trump's 20-point statewide victory?

The AP also missed a golden opportunity to make an important point, namely that the preponderance of no-excuses-needed early voting — an imprudently enacted exercise which has only been permitted in most states since just after the turn of the century — may have protected Gianforte against a much narrower victory or, conceivably, a loss.

Here are the opening paragraphs from Friday morning's AP dispatch by Bobby Caina Calvan and Nicholas Riccardi (bolds are mine):

WAS MONTANA'S WILD HOUSE RACE A TRUMP TEST? NOT SO MUCH

Greg Gianforte spent the day of his greatest political victory out of sight, avoiding questions about the assault charge filed against him on the eve of a congressional race that some cast as a referendum on Donald Trump's presidency. 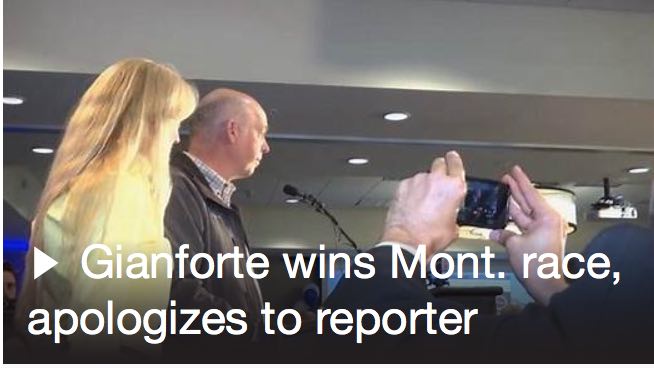 In the end, though, the Republican emerged Thursday night as Montana's new congressman, a comfortable win that may temper Democrats' hopes for a massive anti-Trump wave to sweep them back into power in Washington in 2018.

Yet Gianforte's single-digit win paled to Trump's 20-point romp in Montana in November, a sign that Republicans will have to work hard to defend some of their most secure seats to maintain control of Congress.

The race ultimately turned on the weaknesses of both Gianforte and his opponent, folk singer and Democrat Rob Quist, making it tough to use as a barometer for the nation's political mood.

So in the end, the AP writers claim, Gianforte's victory didn't mean much. Experience teaches us that if Quist had won, it would have been treated as an anti-Trump, anti-Republican earthquake.

The AP writers seemed to go out of their way to claim that the preponderance of early voting didn't matter, despite the fact that Gianforte was charged Wednesday with misdemeanor assault against a UK Guardian reporter. They even took the very unusual step (for AP) of finding two Republicans who said that their votes were not affected by the incident:

... By the time sheriff's deputies arrived, more than half of voters had already cast their ballots in the race due to the state's mail-in voting law. It was difficult to determine on election night to what extent voters who cast a ballot Thursday were influenced by the altercation.

... The assault allegation didn't seem to faze voters. Shaun Scott, a computer science professor at Carroll College in Helena, voted for Gianforte despite the assault charge, saying it was barely a factor in his decision.

"If you have somebody sticking a phone in your face, a mic in your face, over and over, and you don't know how to deal with the situation, you haven't really done that, you haven't dealt with that, I can see where it can ... make you a little angry," Scott said.

... Gianforte's support came from people like Bozeman advertising executive Cailley Tonn, who voted early for Gianforte. After the alleged assault, she said she wouldn't have changed her vote. "I was disappointed to see he flew off the handle like that," she said.

But in the end, she added, she wanted to back the Republican party's platform.

Over the long haul, major political races in states with permissive early voting and 100 percent mail-in balloting have been won by Democrats. States like Oregon and Washington, which were competitive before mail-in voting and other permissive measures were put into place, no longer are. For the left-leaning press, that appears to mean that questioning the wisdom of letting voters make their decisions before all the facts are in on Election Day — even in situations like the one in yesterday's Montana race, where relevant late events should have been taken into consideration by those who had already voted, and obviously weren't — is out of bounds.