A development has occurred which should erase any doubt that basic freedoms are in serious jeopardy in much of blue-state America. It is at least as disturbing as the failure of the University of California at Berkeley and the Berkeley Police Department to provide for the safety of conservative Ann Coulter, leading to the cancellation of her planned appearance there.

In Portland, Oregon, organizers have cancelled a parade which would have taken place this coming Saturday because anonymous leftists threatened to physically attack Republican participants.

The cancellation of the 11th Annual 82nd Avenue of Roses Parade, which has had thousands of participants annually for the past several years, has not been considered newsworthy at the Associated Press or the New York Times, based on searches on "Portland roses" and "Portland parade" (not in quotes), all of which returned nothing relevant at 4 p.m. Eastern Time on Thursday.

In announcing the cancellation on Tuesday, the parade's organizers failed to genuinely level with the community (bolds are mine throughout this post):

For Immediate Release: 11th Annual 82nd Avenue of the Roses Parade and Carnival Cancelled Due to Public Safety Concerns 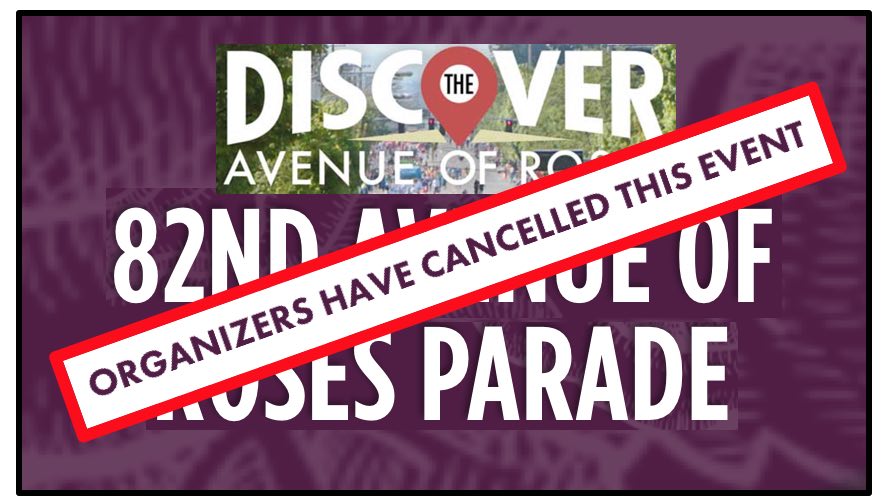 Portland, OR – For more than a decade, 82nd Avenue of Roses Business Association, in partnership with local businesses, residents and community groups, has hosted the 82nd Avenue of Roses Parade. This event, created to celebrate and promote East Portland and the diverse community that lives, works and plays on 82nd Avenue is also the first sanctioned event of the Portland Rose Festival.

Following threats of violence during the Parade by multiple groups planning to disrupt the event, 82nd Avenue of Roses Business Association can no longer guarantee the safety of our community and have made the difficult decision to cancel the Parade originally scheduled for Saturday, April 29 at 9:30am. The related Carnival at Eastport Plaza is also cancelled. We are deeply disappointed that the agendas of these outside groups have so regrettably impacted East Portland and the 82nd Avenue community.

Intimidated organizers' vague description of "multiple groups planning to disrupt the event" and their failure to specifically identify who was threatened effectively and irresponsibly whitewashed what really happened.

Here are more details, as reported by OregonLive.com, which itself waited five paragraphs to identify the claimed affiliation of those who triggered the cancellation:

Organizers cancel 82nd Avenue of Roses Parade, after protesters threaten to shut it down

A threatening email has derailed one of the Portland Rose Festival's signature events, and spurred new debate about the ongoing political protests in Portland.

Organizers of the 82nd Avenue of Roses Parade announced Tuesday that the event will be canceled, for fear that the east Portland parade could be disrupted by "the type of riots which happen in downtown Portland."

Originally scheduled this Saturday, April 29, the parade is meant to highlight the local community and businesses along Southeast 82nd Avenue, aiming to turn around the negative perception many people have of the area. It started in 2007 and has since become a popular event on the Rose Festival calendar.

This year's parade was once again set to feature the Multnomah County Republican Party as one of the many groups slated to march, but that inclusion drew ire from some of the city's left-leaning protest groups.

At least two protests were planned for the day of the parade, one by Oregon Students Empowered and another by Direct Action Alliance. Both events were mentioned in an email sent to parade organizers on Saturday, threatening to shut down the event with hundreds of protesters in the street.

The emailed threats (original here) were far more specific than OregonLive.com reported, as they promised to visit physical violence on Republican parade participants, i.e., "those people" referred to in the message:

“We will have two hundred or more people rush into the parade into the middle and drag and push those people out as we will not give one inch to groups who espouse hatred toward lgbt, immigrants, people of color or others. In case the message was not clear to you this is a sanctuary city and state and we will not allow these people to spread their views in East Portland. You have seen how much power we have downtown and that the police cannot stop us from shutting down roads so please consider your decision wisely.”

So to be clear, a signature family-friendly and completely non-political event meant to promote one of the city's neighborhoods and its businesses has been cancelled because hard-leftists could not tolerate the mere presence of Republicans who have participated in the annual festivities for years.

Stifling someone's right to free speech, as has just occurred in Berkeley, is obviously bad enough. Publicly threatening violence against anyone who doesn't hold the "correct" political views who dares to show their face in public, with the obvious ultimate goal of marginalizing them entirely out of civic life and participation, takes matters to a far more serious and disturbing level.

OregonLive's two reports on the event's cancellation presented conflicting views about whether police might have been willing to beef up security for the event. The earlier report on Tuesday indicated that "When police said they couldn't offer any additional security for the parade, organizers decided to cancel it due to safety concerns." But in a Wednesday evening item, "a police spokesman" claimed, in OregonLive.com's words, that "organizers canceled the event before police had the chance to respond to the threat of violence."

The opening paragraph in the second story indicates that Portland Mayor Ted Wheeler, who is a Democrat, could only express generalized "dismay" over what has occurred without being directly quoted.

The Mayor appears to have a significant problem exercising his authority. Valerie Richardson at the Washington Times reported the following to the rest of the nation on Wednesday about how Wheeler recently gave in to the mob:

A guy who has the police and the Governor at his beck and call who won't clear out "activists" preventing him from entering his own home would not appear to be someone Portland's law-abiding citizens can count on to restore order. It would appear that the "anti-fascists" really are in charge in Portland as they claim, and that guarantees of basic constitutional rights have flown out the window.

Speaking of timidity, OregonLive.com, the website of the Oregonian, the state's largest newspaper, has yet to issue an editorial on the travesty.

Portland's parade cancellation is in its own way a significantly more troubling development than the attack on free speech at Berkeley. The national press should not be ignoring it.