On Thursday, the Associated Press published the equivalent of press release promoting a pro-Muslim billboard campaign orchestrated by the Islamic Circle of North America.

The writeup's author, Rasha Madkour, failed to get any kind of skeptical comment from anyone about the nature of the campaign, and utterly failed to tell readers anything about the Islamic Circle's or its spokesperson's past (and possibly still-present) terrorist ties. Instead, readers were given the equivalent of a feel-good story about members trying to "reclaim the message" of Islam.

Here are Madkour's first five paragraphs (bolds are mine throughout this post): 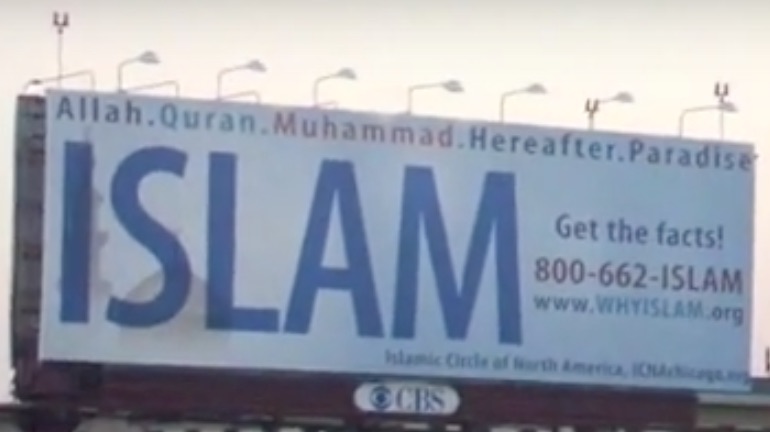 Dozens of billboards with Muslim themes are sprouting nationwide, proclaiming what organizers say is the true message of Islam and its prophet, Muhammad: peace and justice, not extremism and violent jihad.

The New York-based Islamic Circle of North America has erected 100 billboards over the summer that feature statements such as: "Muhammad believed in peace, social justice, women's rights" and "Muhammad always taught love, not hate; peace, not violence." Also listed are a website and a phone number people can call for more information.

The group's president, Naeem Baig, said the idea for the campaign arose after January attacks in Paris by Islamist militants on the French satirical weekly Charlie Hebdo and a kosher grocery store killed 17 people, plus the three attackers.

The perpetrators wrongfully understood the teachings of the Prophet Muhammad, Baig said, and the American Muslim community wanted to reclaim the message.

As to Muhammad's belief in "women's rights" — Really?

As to ICNA — Too bad, barring a sea change in the sponsoring group and its head during the past five years, that it's all a whitewash.

The Investigative Project took a look at the ICNA Member's Handbook in late 2010. It didn't find a lot of peace, love, understanding or tolerance (links are in original):

... the organization's ultimate goal is "the Establishment of Islam" as the sole basis of global society and governance. It also encourages members to deceive people in its proselytizing campaign to help fulfill this goal. This aim is one that ICNA has been actively pursuing as the group has set its sights on America's constitutional separation of religion and state.

It's not the first example of radicalism by one of America's largest Muslim organizations. ICNA's magazine has featured interviews with terrorist leaders in Pakistan, called on youth to fight abroad in Kashmir, and honored like-minded extremist organizations like the Muslim Brotherhood and South Asia's Jamaat-e-Islami. ...

As the handbook explains, ICNA doesn't just believe that religion is a private affair. "Establishment of the Religion" extends beyond the individual and family and into the society, state, and world. "These words [Establishment of the Religion] include not only practicing the religion in individual and collective life and propagating its true teaching to others, but also striving to make this Deen [religion] a way of life for all," the handbook reads.

ICNA's charter is even more explicit. It calls for the "establishment of the Islamic system of life" in the world, "whether it pertains to beliefs, rituals and morals or to economic, social or political spheres."

For ICNA, this means being the American branch of a global phenomenon that they refer to as the 'Islamic Movement.' The 2010 Handbook notes, branches of this movement "are active in various parts of the world to achieve the same objectives. It is our obligation as Muslims to engage in the same noble cause here in North America."

Working in an 'Islamic Movement' culminates in an Islamic super-state, the Caliphate, the handbook says.

Joe Kaufman had to the goods on ICNA and its leader at FrontPage Magazine in 2007:

... this author broke a story in FrontPage (‘Helping Hand to Hamas’) documenting how ICNA was and is the top donor to a charity controlled by the Muslim Brotherhood of Pakistan, Jamaat-e-Islami (JI), that was financing Hamas.

... As well, this author showed how both of ICNA’s own charities, ICNA Relief and Helping Hand, were and are “partner” organizations to another JI charity located in Pakistan, the Al-Khidmat Welfare Society (AKWS). Their two logos were and are the only ones found on the AKWS “Mission Partners” page. Helping Hand even states, right on its website, that it has a Pakistan office in Islamabad.

And finally, this author proved that ICNA is the American arm of JI.

... Naeem Baig’s statement about how his organization has “no relations – no links – to any organization or any country outside the United States” was entirely false.

... what of Baig, himself? In July of 2004, at a press conference to discuss an upcoming three-day meeting on national and international political issues, Baig took the opportunity to laud convicted terror supporter, Fawaz Damra. Damra, a fundraiser for Palestinian Islamic Jihad (PIJ) and the founder of Al-Qaeda’s headquarters in Brooklyn, New York, prior to the 1993 World Trade Center bombing, had been found guilty, in July of 2004, of providing false information on an immigration form when he obtained American citizenship in 1994. He would later be deported.

Baig stated, “He is a well-respected imam in the Muslim community. We respect his scholarship and we invited him to the program and we would like to listen to him and what he has to say.” Did Baig care about Damra’s links to terrorist organizations or the lies he told, in order to receive citizenship? Apparently not.

Madkour, who strangely describes hereself as a "former AP reporter" at her Twitter account, did get a bit of a dissenting opinion — from yet another terror-tied source:

While praising the billboard campaign as a "laudable effort," the leader of Boston's biggest mosque said his institution prefers to take a different approach.

"We feel our actions speak louder than words," said Yusufi Vali, executive director of the Islamic Society of Boston Cultural Center. The group aims to live the faith's values through its food pantry and its work on affordable housing and criminal justice, Vali said.

Well, okay then. Let's see how well the Islamic Society of Boston Cultural Center has done in those supposedly noble efforts:

... The mosque attended by the two brothers accused in the Boston Marathon double bombing has been associated with other terrorism suspects, has invited radical speakers to a sister mosque in Boston and is affiliated with a Muslim group that critics say nurses grievances that can lead to extremism.

Several people who attended the Islamic Society of Boston mosque in Cambridge, Mass., have been investigated for Islamic terrorism, including a conviction of the mosque's first president, Abdulrahman Alamoudi, in connection with an assassination plot against a Saudi prince.

Its sister mosque in Boston, known as the Islamic Society of Boston Cultural Center, has invited guests who have defended terrorism suspects. A former trustee appears in a series of videos in which he advocates treating gays as criminals, says husbands should sometimes beat their wives and calls on Allah (God) to kill Zionists and Jews, according to Americans for Peace and Tolerance, an interfaith group that has investigated the mosques.

The head of the group is among critics who say the two mosques teach a brand of Islamic thought that encourages grievances against the West, distrust of law enforcement and opposition to Western forms of government, dress and social values.

"We don't know where these boys were radicalized, but this mosque has a curriculum that radicalizes people. Other people have been radicalized there," said the head of the group, Charles Jacobs.

The AP's Madkour, who seems to be (or to have been) a bit of a go-to person on Islamic matters for several years, gave readers no reason to believe that there is anything untoward about the billboard effort, the group backing it, or that group's leader. If she knows so much about Islam, how can she not be aware of any of what has been brought out in this post?

Or if she is aware, why didn't she mention any of it in her writeup?