The news out of Venezuela has apparently become so grim that the arguably Chavista-sympathetic press barely bothers to report it in any kind of sutstantive fashion. Inflation has gone wild, the level of violent crime has become frightening, and the government has taken to jailing citizens who dare to tweet their dissatisfaction with the regime of Nicolas Makuro (note that the linked report was prepared by a freelance journalist and not one of the worldwide wires; where have they been while this has been going on?).

One telling Associated Press dispatch from Venezuela last week concerned what's left of the nation's food distribution system. The item revealed that the press refuses to get over its classist obsessions, even as an entire country falls apart. A video seen after the jump will show that the government's "solution" has no realistic chance of fixing the problem.

The AP item is unbylined, which is fortunate for whoever wrote it, because it's utterly embarrassing in its ignorance: 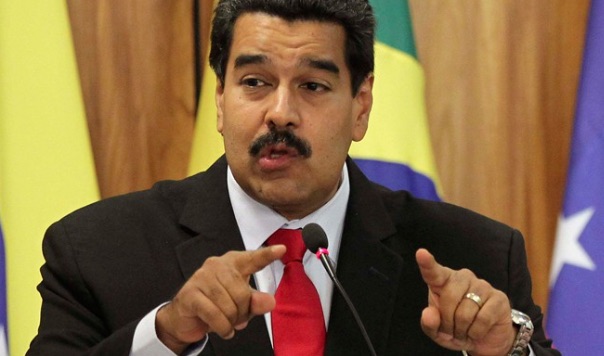 A food industry group said Monday that Venezuela's government has ordered companies to distribute food staples to a network of state-run supermarkets amid chronic shortages of basic goods.

Federal authorities ordered producers of milk, pasta, oil, rice, sugar and flour to supply between 30 percent and 100 percent of their products to the state stores, he Food Industry Chamber said.

Chamber President Pablo Baraybar warned that the order could cause major supply problems.

Such a cute word: "divert."

The Venezuelan government apparently can't get enough food distributors to place products in its stores in a voluntary exchange. Why? It's a very safe guess that those who have tried haven't been paid enough to cover their costs, haven't been paid at all, or are being strung out to the breaking point with slow payments.

So the government's solution is to demand that they stock the store shelves. There's a word for this, and it's not "diversion." It's "theft."

Rigid currency controls and a shortage of U.S. dollars make it difficult for Venezuelans to find imported goods. Companies say the controls also make it hard to turn a profit and justify production.

In other words, where supply and demand are still allowed to operate, things are okay. Where they aren't — at government stores which are supposed to be helping the "working class" but which are instead creating widespread misery — there are chronic shortages.

So the government's solution is to steal from the market in a likely vain attempt to prop up the state-run system.

How unlikely is this "solution" to accomplish anything?

The following video purports to show current conditions in a Venezuelan store. It's nearly empty, and from all appearances in virtual chaos (HT Zero Hedge):

Here is the narrative accompanying the video (bolds are mine; paragraphs breaks added by me):

People are starving-walk through a supermarket.

According to an in-country NGO, the Venezuelan Observatory of Violence, the 2014 murder rate was the second-highest globally, war zones included.

Venezuelans now struggle to access the most basic necessities. Suffering from chronic shortages of coffee, toilet paper, and just about every good Venezuela imports (most goods are imported, thanks to Chávez’s idiocy), citizens must line up for hours to scrounge whatever they can. They struggle for sustenance and also basic survival.

But Maduro isn’t worried. His power insulates him from the icy waters of socialism. And he’s happy to blame the United States for his country’s ills. In recent days, Maduro has been threatening with military exercises and fiery rhetoric. And while the most vulnerable are left to rot, the Chávezville elite live in splendor.

I haven't found any evidence that formerly indefatigable Chavista supporter Sean Penn has had much to say about recent developments in a country whose government he praised effusively last year.