During his MSNBC newscast on thursday morning, Jose Diaz-Balart abandoned reporting to push his opinion on the death of “Cecil The Lion.” In the newscast, Diaz-Balart, along with Democratic Congresswoman Betty McCollum from Minnesota, called for increased focus on animal rights, and condemned big game hunting in general.

The domesticated lion was controversially killed when Zimbabwean hunting guides lured him into a trap and Walter Palmer, an American dentist and avid big game hunter, shot him with a bow and arrow. While it is suspected that the kill was illegally conducted, Palmer contends that he did not intentionally break any laws when he shot the lion.

The liberal news anchor condemned this hunt for not being “man against lion,” and suggested that big game hunting in general was evil:

JOSE DIAZ-BALART: I have to tell you something. There were so few lions left in the world, so few tigers and leopards, and these beautiful animals that have been here before we got here, and they're about to be extinct, and you have people who are willing to do what we saw in Zimbabwe. 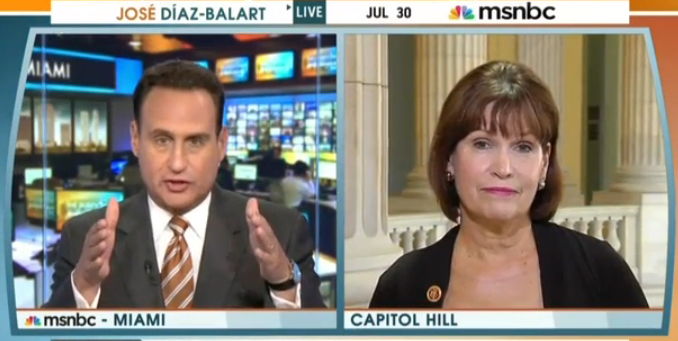 You know, to lure them out and then attack them without their knowledge. This isn't a situation where it's man against, you know, lion. This is somebody hidden, popping an arrow into him without the animal knowing it.

Representative McCollum seemed slightly uncomfortable with this extreme stance on hunting, and reminded the news anchor that many people in her state participate in legal hunting practices, and "by and large have ethics." She then continued her push to have legal hunting co-exist with conservation efforts, highlighting her condemnation of poachers:

REP. BETTY MCCOLLUM (D-MN): Well, as you know, Minnesota is a great outdoors state. Big supporters of hunting and fishing. But our hunters back home are just outraged at the callousness-- the fact that poaching and baiting was used on this iconic species. That's why Minnesotans are really wanting the world to know that our hunters, by and large, have ethics. And that one American, especially from our home state, could be involved in such a callous disrespect of international laws, perhaps, is really, really outrageous.

Balart ended the segment with a final shot at the hunting community, calling for an increased focus on “animal rights” instead of calling for the death of hunters:

JOSE DIAZ-BALART: I think it's important we focus our outrage and our concerns on things we can do legally. On things that will not hurt anybody else. It's also, you know, to be threatening people's lives over this is, I think, different than dealing with it the way you're dealing with it and so many people should, which is support animal rights and support things that are trying to control this.

In addition to abandoning his duty of reporting the news in an unbiased manner, Jose Diaz-Balart has offered absolutly no outrage over much worse crimes such Planned Parenthood mutilating, joking about, and selling the tissue of aborted babies. In fact, Diaz-Balart and MSNBC completely censored coverage of the 4th and most disturbing video released by The Center For Medical Progress on the scandal, showing a stark hypocrisy and bias in the way his program covers newsworthy topics.