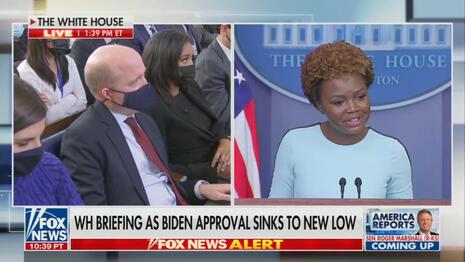 While the network newscasts are still hiding the latest terrible polls for Joe Biden and burying the cash payouts to illegals, some of these questions do actually come up at the White House press briefing. But often, they don’t make it to ABC, CBS and NBC. Reuters correspondent Jeff Mason on Monday brought up Biden’s collapsing numbers, at 38 percent according to USA Today. But he did it in the most gentle way imaginable.

Mason brought it up in a cautious, non-threatening way. But credit to him, at least he mentioned plummeting numbers.

JEFF MASON (Reuters): One other topic, the President and the Vice President poll numbers have been falling. How big of a concern is that for this White House, particularly with an eye towards the midterms elections just a year from now?

KARINE JEAN-PIERRE: Are you talking about a particular poll?

Look, one of the things I want to say, we are confident that our policies will improve the lives of nearly every American and so grow our economy and create jobs and that's our focus to make sure that we will continue to push the President’s economic policies. That's not going to be our focus right now. The President was also asked of this last Tuesday and he wants to make sure that we deliver for the American public.

Fox’s Peter Doocy at Monday’s briefing tried, again, to get some real answers out of the White House on cash payouts to illegals. Once again, Jean-Pierre stonewalled.

PETER DOOCY: Now that the President is on the record as of Saturday supporting compensation for illegal immigrants who are separated from family at the border, who counts as separated? If someone was separated for a few hours or a few days with a be eligible to settle a suit and get this payment from DOJ?

DOOCY: But the President hasn’t gone into great detail about the policy, so, if he can answer it, I'm curious. Going back to 2018, some illegal immigrants were given a choice, get deported alone or get deported with their kids. If someone chose to be separated, chose to go back by themselves without their families, would they be eligible to settle one of these lawsuits?

JEAN-PIERRE: Peter, I’m going to refer you to the Department of Justice. I don't have anything more to say and I’m going to move on. Okay?

On Monday, I reported that ABC’s Good Morning America on Sunday allowed 54 seconds to the controversy. On Monday night and Tuesday morning, the networks ignored the story again. The press keeps trying to hide the bad news for Biden, but the American people are still noticing.