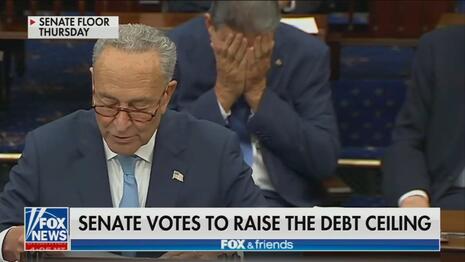 Moderate Democrat Joe Manchin hung his head in frustration on Thursday night and then spoke out against the extreme, partisan diatribe from his party’s leader, Chuck Schumer. But you wouldn’t know that from the three networks on Friday. ABC, CBS and NBC all ignored the awkward moment of Manchin caught on camera.

On Fox and Friends, however, Griff Jenkins highlighted the vicious attacks from the Democratic Leader over raising the debt limit: “You might have expected Chuck Schumer to show some gratitude to the GOP Leader. But no, instead, he viciously attacked him.”

In the speech, Schumer slimes the GOP: “Republicans played a dangerous and risky partisan game, and I am glad that their brinksmanship did not work.” A visibly uncomfortable Manchin, sitting behind Schumer, shakes his head and then buries it in his hands.

As the New York Post noted, Manchin walked out during the Majority Leader’s speech and later told reporters: “I didn’t think it was appropriate at this time.... We have to de-weaponize. You can’t be playing politics... Civility is gone.”

Yet despite a combined six hours of available air time, ABC’s Good Morning America, CBS This Morning and NBC’s Today all skipped the debacle. When Mitt Romney spoke out against Donald Trump during his presidency, media outlets hailed him as a “profile in courage” and a “historic” figure.

Manchin’s clear and glowing uncomfortableness with the Democratic Party receives no such praise. Perhaps it just makes journalists uncomfortable.

A Fox transcript is below:

GRIFF JENKINS: You might have expected Chuck Schumer to show some gratitude to the GOP Leader. But no, instead, he viciously attacked him.

CHUCK SCHUMER: Despite immense opposition from Leader McConnell and members of his conference, our caucus held together and we pulled our country back from the cliff's edge that Republicans tried to push us over.

JENKINS:  Now, guys, look closely. I want you to see this video right here. You see Joe Manchin putting his face into his hands visibly disappointed by Schumer's remarks. Now, this bill heads to the house where it must pass before going to the President's desk. We will see what happens. Meanwhile, the President hopes to avoid a repeat of last month's disastrous jobs numbers when the economy added a mere 235,000 jobs. Well short of the projected 700,000. Today's economists are forecasting 500,000 new jobs and a 0.1% drop in unemployment to 5.2 percent to 5.1 percent. The projection due in part to subsiding Covid cases. But if they fall short again, look for the president, perhaps, to blame the pandemic after he praised vaccine mandates on the road yesterday. We will find out these numbers come out at 8:30 this morning. Brian, Ainsley, Steve?

BRIAN KILMEADE: Thanks, Griff. Great camera work by Joe Manchin. Picking up Joe Manchin in the back. I don't think he knew he was on camera. Clearly.