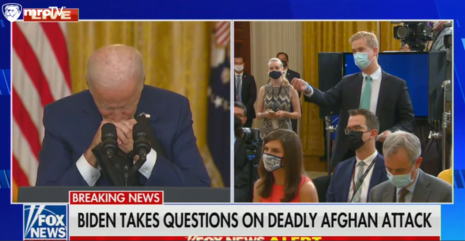 Joe Biden hit record lows in two new polls on Thursday. Will the journalists at ABC, CBS and NBC bother to cover, or even notice, the cratering polling for the Democrat? They certainly enjoyed covering bad news for Donald Trump. In the new NPR/PBS survey, Biden’s approval has slipped to just 43 percent, a new low. In the new Rasmussen poll, the President has fallen to 42 percent, a tie for his record low.

The fallout from the Afghanistan withdrawal continues for this White House as the President's poll numbers continue to sink. According to the latest NPR/PBS NewsHour Marist poll, the President's approval ratings sliding to just 43 in the latest poll. Now, that's down six percent points since July. The biggest decline has been in amongst independent voters only 36 percent saying they approve of the job the president is doing.

Why might network network journalists not want to look at these terrible polls for Biden? NPR.org's write up of the bad numbers might have the answer. Writer Domenico Montanaro explained:

That a majority of independents now disapprove of his performance is bad news for Biden and Democrats. They're a key swing group, one Biden won in 2020 but who now think he's off track.

Republicans have struggled to drum up the kind of animus toward Biden as they did for, say, Hillary Clinton. But now, seven months into his presidency, they seem to have found what to grind their teeth about, from cultural and economic issues to Afghanistan.

A whopping 41% of U.S. adults, including 82% of Republicans, now strongly disapprove of the job Biden is doing. That is similar to the unprecedented enmity shown toward President Donald Trump.

Notice the "Republicans pounce"-esque tone of the article?

Meanwhile, Rasmussen now has Biden at 42 percent, a tie for his lowest numbers in their survey.

The Biden White House is cratering in the polls. The Real Clear Politics average showed the approve/disapprove numbers intersect in late August as the Afghanistan disaster worsened. Take a look at those black and red lines: 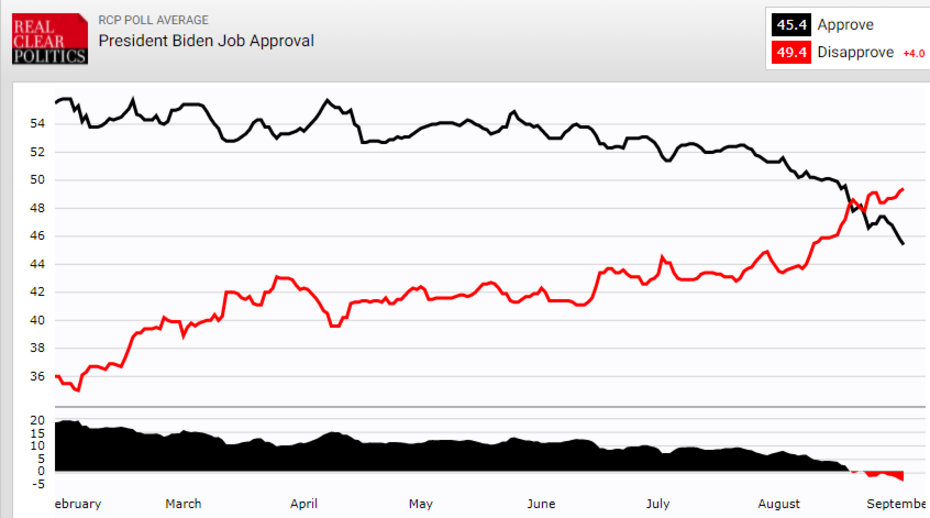 On August 23, the MRC's Kyle Drennen wrote about NBC burying bad polling for Biden. Journalists, who covered bad polls for Trump with glee, have a responsibility to report on the collapse of the Biden administration.