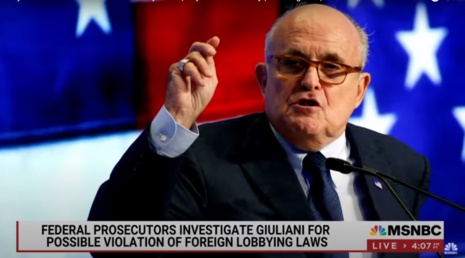 Another week, another round of embarrassing corrections from major news media outlets. The Washington Post, The New York Times and NBCNews.com, among others, were forced to retreat on stories saying that Rudy Giuliani was warned by the FBI over Russian disinformation. The New York Times buried its correction at the very end of the article:

An earlier version of this article misstated whether Rudolph W. Giuliani received a formal warning from the F.B.I. about Russian disinformation. Mr. Giuliani did not receive such a so-called defensive briefing.

An earlier version of this article included an incorrect report that Rudolph Giuliani had received a defensive briefing from the FBI in 2019 warning him that he was being targeted by a Russian influence operation. The report was based on a source familiar with the matter, but a second source now says the briefing was only prepared for Giuliani and not delivered to him, in part over concerns it might complicate the criminal investigation of Giuliani. As a result, the premise and headline of the article below have been changed to reflect the corrected information.

The Washington Post also backed down on the idea that the FBI had warned Giuliani. But the Post, unlike the Times, at least put the correction at the top.

Correction: An earlier version of this story, published Thursday, incorrectly reported that One America News was warned by the FBI that it was the target of a Russian influence operation. That version also said the FBI had provided a similar warning to Rudolph W. Giuliani, which he has since disputed. This version has been corrected to remove assertions that OAN and Giuliani received the warnings.

But none of this is new. In March, The Post offered a stunning (online only) correction to a January 9, 2021 story claiming Donald Trump told the Georgia Secretary of State to “find the fraud” in the state:

Correction: Two months after publication of this story, the Georgia secretary of state released an audio recording of President Donald Trump’s December phone call with the state’s top elections investigator. The recording revealed that The Post misquoted Trump’s comments on the call, based on information provided by a source. [Anonymous sources are not always reliable!]

Trump did not tell the investigator to “find the fraud” or say she would be “a national hero” if she did so. Instead, Trump urged the investigator to scrutinize ballots in Fulton County, Ga., asserting she would find “dishonesty” there. He also told her that she had “the most important job in the country right now.” A story about the recording can be found here. The headline and text of this story have been corrected to remove quotes misattributed to Trump.

Oh well. Oops, right? It was only the money quote that supported the whole contention. On April 1, 2021, NPR hyped Hunter Biden’s new memoir and dismissed the New York Post’s laptop expose as ““discredited by U.S. intelligence and independent investigations by news organizations."

Except... it wasn’t. After getting called out, NPR offered this rather pathetic correction at the bottom of the story:

The Washington Post claims “democracy dies in darkness.” Accountability dies with a small update at the bottom of a website few will ever check again.