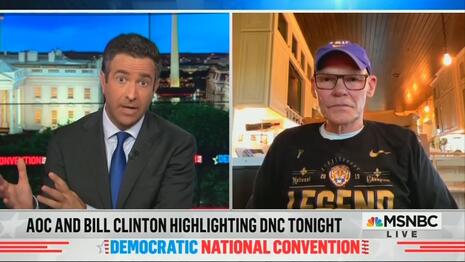 Democrats claim to embrace women speaking out against harassment in a #MeToo era. So it’s awkward to see journalists look the other way at Bill Clinton speaking on night two of the Democratic National Convention. It’s even more awkward with newly unearthed photos of the former president getting a massage from an alleged Jeffrey Epstein victim.

Bill Clinton grins with pleasure as he enjoys an intimate neck massage with a young Jeffrey Epstein victim in never-before-seen photographs obtained exclusively by DailyMail.com.

The troubling pictures are an ill-timed reminder of Clinton's links to Epstein as the former President, 72, prepares to endorse Joe Biden tonight at the Democratic Convention.

Clinton traveled numerous times on the dead pedophile’s private Jet, the Lolita Express, socialized with his alleged Madame, Ghislaine Maxwell, and faced a slew of sexual misconduct accusations himself during his years in public life.

The Beat host Ari Melber had a perfect opportunity to ask famous Clinton strategist James Carville when he talked to him on Tuesday night. It never came up. Instead, Melber asked Carville about shifting political strategies, bringing up 1992: “Does any of that stuff apply now or these are just two different times?”

Highlighting the rise of the party’s socialist left, the host asked, “Do you think AOC — do you think she could be president some day?” Melber quizzed about Biden’s team of strategists: “I’m curious about what you think of his team and that balance?”

All these horse race questions and NOT ONE on Clinton’s growing #MeToo dilemma. Not one question on a second person claiming former president was on the dead pedophile’s sex island.

This disgusting attempt to protect Bill Clinton was sponsored by Disney and ServPro. Click on the links to let them know what you think.

A transcript of questions is below. Click “expand” to read more.

ARI MELBER: The DNC began with Obama vibes and turns to the Clinton legacy tonight. Night two’s headliners: Former President Bill Clinton. And here we are, joined by one of the Democratic gururs most closely aligned with Clinton’s victories. James Carville was the lead strategist for ‘92's campaign when Clinton defeated an incumbent president in a recession. A play book Democrats want to reprise now against Trump. Good evening, sir.

JAMES CARVILLE: Thank you. Good evening to you.

MELBER: Does any of that stuff apply now or these are just two different times?

MELBER:  And as you say, the, that's a challenge that is all the more critical as we've been half joking half covering this zoom era we're living in for good health reasons. But there’s also the message. He's a clear communicator on the economy, but when it comes to the economy, and balancing government and progressive goals, as you know, part of the party has shifted. I want to play a little bback and forth between old Clinton and new AOC for your reaction. Take a look.

MELBER:  The tough question and I'm sure you'll give me a good strategic answer. What one of them is right?

MELBER: Do you think AOC — do you think she could be president some day?

MELBER: What is key in making the case because some strategists do well behind the scenes. You obviously, then and now, made your way through the television channels effectively. It's different eras, someone necessarily on the Biden team right now that sort of pops the way you were then. But maybe that’s okay right now. I’m curious about what you think of his team and that balance?

MELBER: The last thing I asked you, just 30 seconds left. Donald Trump talked a big game about kneecapping the Post Pffice, he appears to be beat back on defense on that tonight. What do you politically take from what Pelosi and the Democrats did in that short time?