It hasn’t been a good week for NBC. First, MSNBC’s Lawrence O’Donnell had to retract a bombshell claim that Donald Trump’s taxes showed loans co-signed by Russian oligarchs. Now, MSNBC has backed down on an assertion that “children born to U.S. service members outside of the U.S. will no longer be automatically considered citizens. Parents will have to apply for citizenship for their children in those situations.”

That was tweeted by Ken Dilanian, an NBC news correspondent who covers national security, on Wednesday afternoon. Less than an hour later, he issued a correction. Here’s the original (now deleted) tweet: 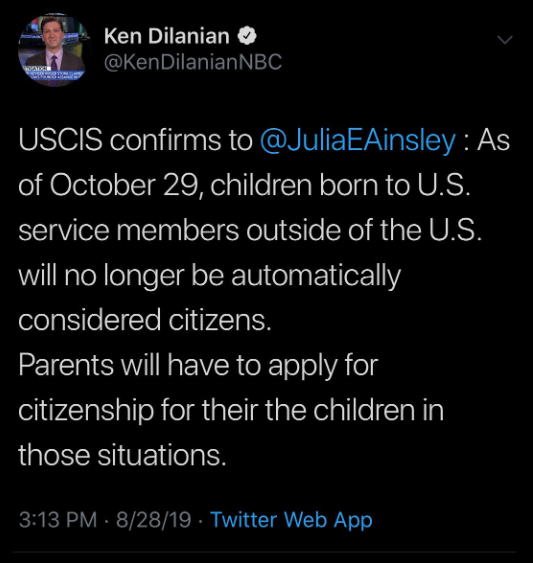 And here’s the follow-up: 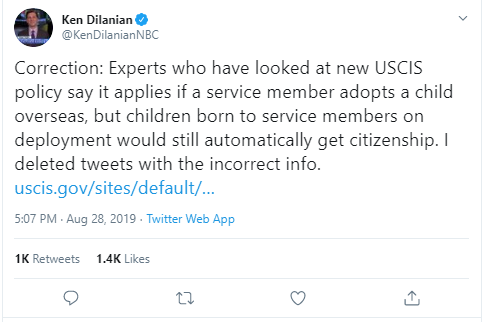 As Reason.com reported, “Dilanian (and others) got it wrong.” Reason writer Elizabeth Nolan Brown clarified:

As you're aware, the Trump administration has introduced a new policy that makes it more difficult for service members deployed abroad, for their children to automatically get citizenship in the U.S. They have to go through an application process, et cetera. This will also affect State Department employees, for instance, who are serving their country abroad. As a member of the military do you find that change acceptable or warranted?

After reviewing a summary of United States Citizenship and Immigration Services Acting Director Ken Cuccinelli's comments on the topic, Bizpacreview.com summarized the extent of the change:

So the rule will apply to two sets of service members: Those who aren’t yet U.S. citizens themselves, and those who’ve adopted a non-citizen child.

Moreover, and more importantly, both sets will still have the opportunity to apply for citizenship for their children. These are the facts. Unfortunately, these facts were ignored by a large swath of the mainstream media.

It’s not surprising that journalists rushed to get this story not, not bothering to study the facts.