Hours after preemptively deriding an unnamed Supreme Court nominee as “controversial,” ABC’s Nightline on Monday night worried about the “reliably conservative” Brett Kavanaugh and the vacancy that is sending “shivers” down the spines of liberals.

The ideological labels appeared as Terry Moran informed viewers of the “solidly conservative choice.” Later, he underlined: “Kavanaugh has been reliably conservative throughout most of his career dating back to 1989 when he was a student writing for the Yale Law Journal.” (“Reliably liberal” is not a term often used by journalists when Democrats have a Supreme Court pick.)

Using hyperbolic language, Moran fretted that the nomination is “sending shockwaves through the nation and shivers down the spines of liberals.” The journalist reminded viewers of liberal anger: 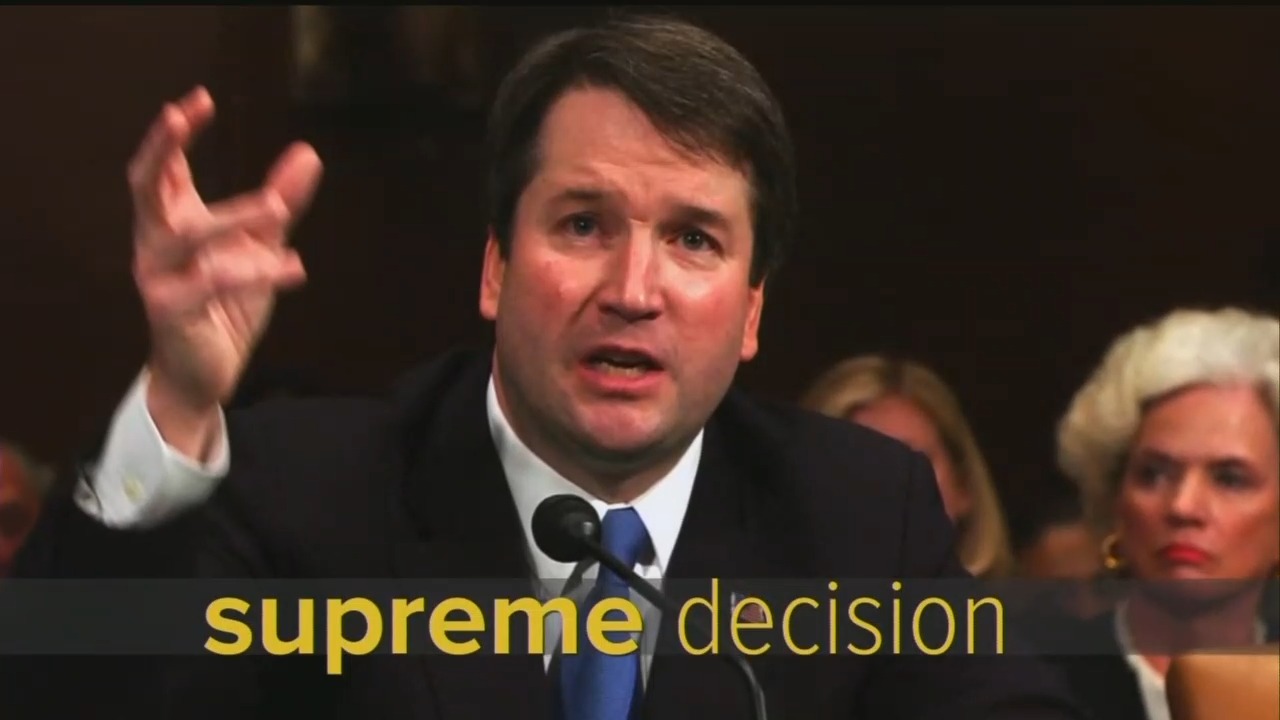 But Democrats are still seething over the last time there was a Supreme Court opening in 2016 when Justice Antonin Scalia died suddenly, it was McConnell who blocked a vote on Barack Obama's nominee Merrick Garland until after the presidential election.

Hours before the announcement of Kavanaugh, the Nightline Twitter account alerted: “Tonight on Nightline, @TerryMoran reports on the controversial Supreme Court Justice pick and the possible implications for the country.” Again, this was BEFORE we even had a name.

A transcript is below. Click “expand” to read more. (Thanks to the MRC's Curtis Houck for the transcript.) 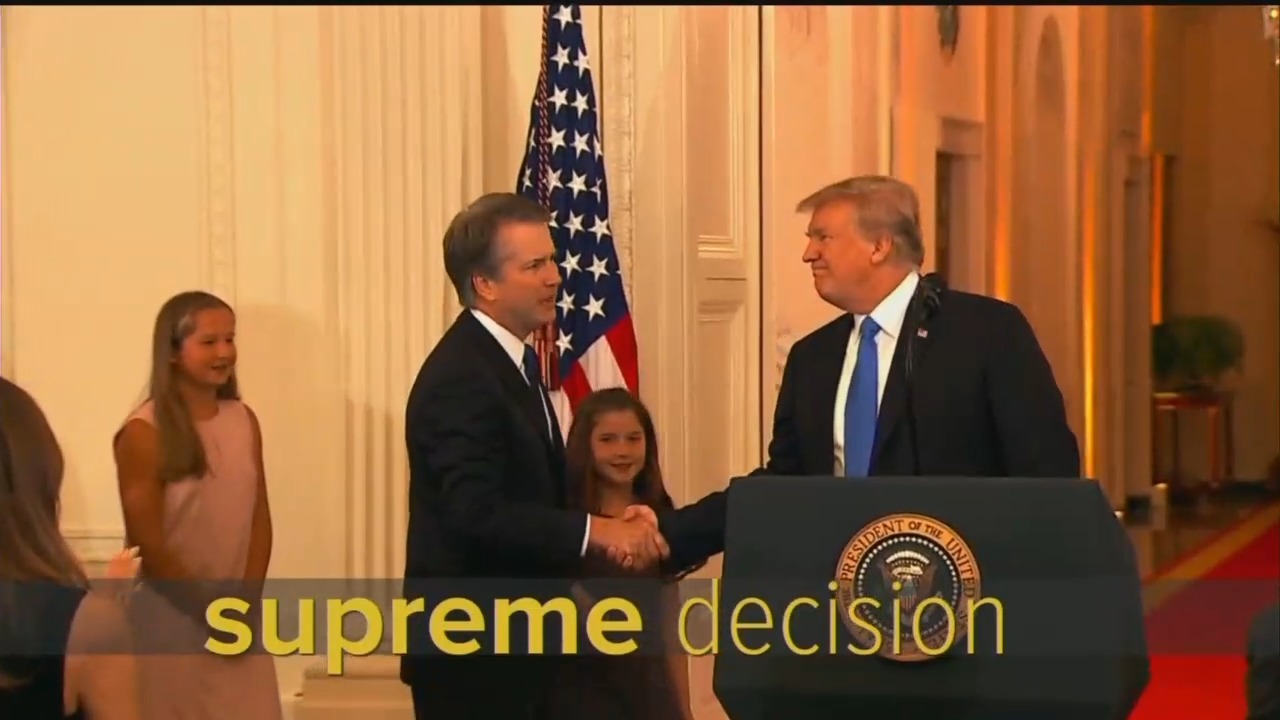 CHANG: What you need to know about President Trump's nominee for the Supreme Court and the confirmation battle ahead. Democrats and Republicans facing pressure to vote against their own parties. Protests raging tonight with immigration policy, gun reform, and abortion rights potentially hanging in the balance.

CHANG: We turn now to the hotly anticipated announcement. President Trump nominating Judge Brett Kavanaugh to fill a Supreme Court seat that will be vacated by Justice Anthony. His confirmation promises to be an epic partisan battle with fierce debate over how a conservative majority on the high Court could affect restrictions on everything from immigration and affirmative action to abortion rights. Here's ABC's Terry Moran.

WHITE HOUSE ANNOUNCER: The President of the United States.

TERRY MORAN: It was straight out of a network play book. A primetime announcement to an audience on the edge of its seats. President Trump naming his Supreme Court nominee.

TRUMP: It is my honor and privilege to announce that I will nominate judge Brett Kavanaugh to the United States supreme court. [SCREEN WIPE] There is no one in America more qualified for this position and no one more deserving.

BRETT KAVANAUGH: Mr. President, I am grateful to you and I'm humbled by your confidence in me.

MORAN: Kavanaugh, a solidly conservative choice with an impressive pedigree.

KAVANANUGH: My judicial philosophy is straightforward. A judge must be independent and must interpret the law, not make the law.

DAN HARRIS [on 06/27/18]: Supreme Court Justice Anthony M. Kennedy announcing he will retire. This leaves a major opening on the Supreme Court of the united States.

MORAN: — sending shockwaves through the nation and shivers down the spines of liberals, who had come to rely on Kennedy's swing vote on social issues. That decision opening up a second seat for President Trump to fill on the bench, allowing him to help shape the country's highest court for generations to come. [TO MORAN] From a political standpoint, purely political, what do you make of this nomination tonight?

RICK KLEIN: This is a very traditional pick. It's the kind of pick you could imagine a Jeb Bush or a Marco Rubio or a Ted Cruz picking.

MORAN: A Maryland native, Brett Kavanaugh was raised Roman Catholic, attending the Tony Georgetown Prep before going on to study at Yale both as undergrad and then again as a law student. At 53, he has served in the same court that produced Supreme Court justices Ruth Bader Ginsburg, Antonin Scalia, Clarence Thomas, Warren Burger, and John Roberts. Kavanaugh has been reliably conservative throughout most of his career dating back to 1989 when he was a student writing for the Yale Law Journal.

KATE SHAW: He ultimately was one of the authors of the Starr Report to congress that recommended a number of grounds for impeaching president Clinton including, you know, a number of misstatements, obstruction of justice, things of that nature.

MORAN: Kavanaugh went on to serve as counsel under the Bush administration and is considered an establishment choice for the nomination.

TOM BOSSERT: You'll find him to be a very calm and thoughtful man.

BOSSERT: What people will be most surprised about over the coming days and weeks will probably be the human side of Judge Kavanaugh. He is a very soft, very kind, very smart individual.

MORAN: Despite overwhelming support tonight, his record has raised red flags for some conservatives.

SHAW: In a couple of cases, he voted either to uphold or to decline to decide cases involving challenges to ObamaCare, right? The Affordable Care Act and those are viewed by some on the right as a signal that he might not be kind of as solid a conservative as the President should select.

MORAN: But one of the biggest questions is how fully he would fulfill this campaign promise.

COKE ROBERTS: He did say tonight that he did believe in interpreting laws and the Constitution as they are written but also as history and precedent has determined, so that leaves him a lot of wiggle room there.

MORAN: And Roe vs. Wade is now a precedent that's two generations or more old.

ROBERTS: Yes. I think the most likely thing than a direct overthrow, at least at the beginning, is an erosion.

SUPREME COURT PROTESTERS: Hey, hey! Ho, ho! The patriarchy has got to go!

MORAN: But in these deeply divided times, the road to confirmation for any of the candidates would be a partisan fight.

SENATE MINORITY LEADER CHUCK SCHUMER: This is the most important Supreme Court vacancy for this country in at least a generation.

MORAN: But Democrats are still seething over the last time there was a Supreme Court opening in 2016 when Justice Antonin Scalia died suddenly, it was McConnell who blocked a vote on Barack Obama's nominee Merrick Garland until after the presidential election and then implemented the so-called nuclear option to get President Trump's pick Neil Gorsuch confirmed with a simple majority vote after Democrats triggered that move. [TO KLEIN] Going forward, then, can the Democrats find a way to stall until after the midterm elections?

MORAN: Kavanaugh will need 50 votes plus the Vice President for confirmation, which could come a number of ways, with 51 Republicans in the Senate. All eyes are on the conservatives who have voted against the party line and these Democrats who defied their party too when they voted for Gorsuch. Earlier today, other Senate Democrats warning the President's pick would have a serious impact on the direction of the country.

MORAN: Kennedy was the man in the middle, often the swing vote who sided with conservatives plenty but surprised people on social issues from race and civil rights to abortion and also on environmental law. [TO ROBERTS] What's at stake here at the Supreme Court?

ROBERTS: Decades of jurisprudence and Brett Kavanaugh is 53 years old. Given life terms these days, he could easily be there for 40 years and this — now, this Court is decidedly on the right.

MORAN: Outside the court, that battle line already drawn. Demonstrations on both sides of the abortion debate.

STUDENTS FOR LIFE OF AMERICA’s TINA WHITTINGTON: We have a Supreme Court that is going to be stacked to a side of respecting life and law who will give us an opportunity to even have a place at the table.

PLANNED PARENTHOOD’s KELLEY ROBINSON: There's a lot at stake here and like I said, access to safe and legal abortion is on the line right now. That's why we're out here because we know that there's too much at stake to stay home.

MORAN: In the end, it is this key issue that could sway two Republican senators who have made it clear they want Roe vs. Wade upheld. As voices quiet outside the courthouse tonight, many see a fight coming, a battle not just for the bench but for the direction of the country. For Nightline. I'm Terry Moran in Washington.