ABC’s Nightline on Monday night repeatedly pushed the idea that Colorado cake baker Jack Phillips is guilty of bigotry, even finding it “ironic” that the Supreme Court found discrimination against him. In a nearly ten minute segment, Co-host Juju Chang condescendingly lectured Phillips about not baking cakes for gay marriage: “You're well aware that history, historically, businesses have used religious exemptions to deny service to African-Americans at hotels or restaurants.”

Chang conceded a claim could be made for a “narrow victory for religious rights activists” after the ruling. But she was baffled at the logic of the Court: “At least four justices affirming gay rights, but ruling in favor of the baker because, ironically, they say it was [Phillips] who faced anti-religious bias, calling out the Colorado Commission's language as disrespectful and hostile towards his sincere religious beliefs.”

Ironically? Get it? Because it’s really the baker who’s bigoted. Underlining the point, she asked Phillips: “You don't see it as an act of discrimination?” Sensing a theme? Chang pressed:

There's the slippery slope of does this chip away at other artisans, whether it's a jeweler or a makeup artist or others who would then have the ability to essentially boycott gay marriages? 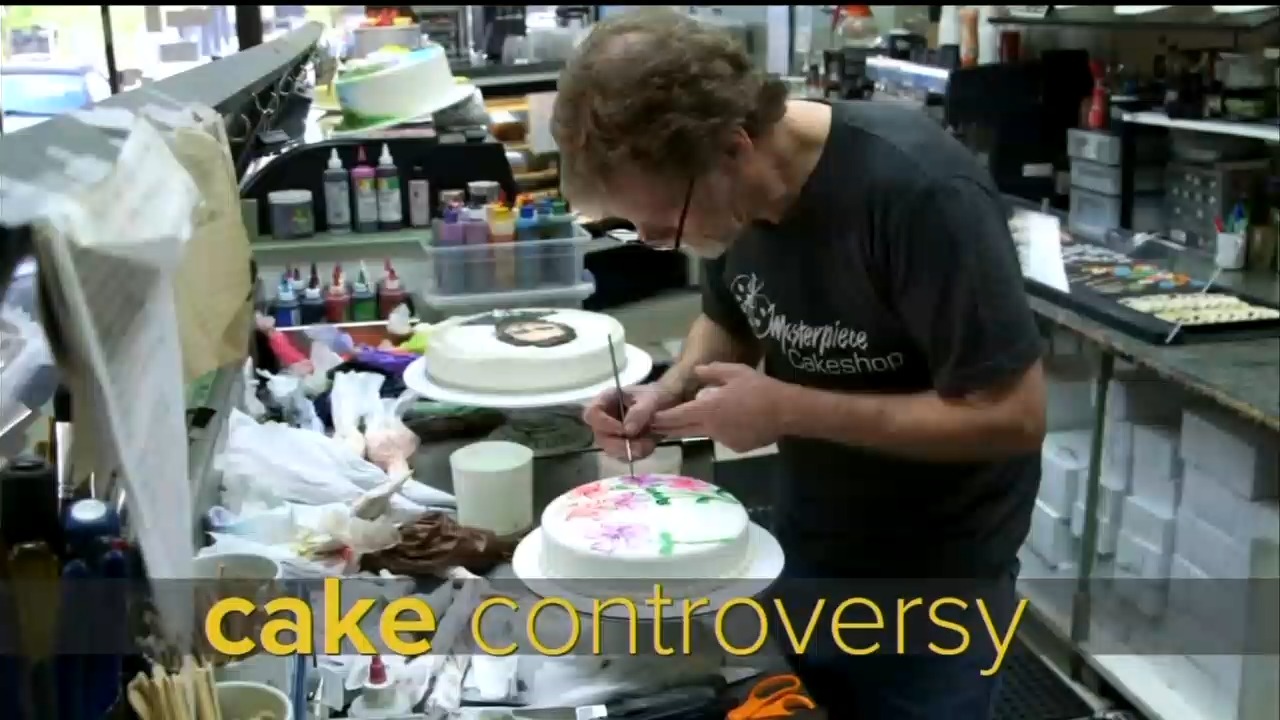 Chang’s segment is better than most reports on the Court’s ruling. She at least had sit-down conversations with Phillips, as well as Charlie Chang and Dave Mullins, the gay couple who brought the case after being denied a cake. But they were not pressed as intolerant.

Time magazine on Tuesday echoed this theme with a leading headline: “Colorado Bakery Owner Insists He's Not Biased Despite Going to Supreme Court Over Cake for Gay Couple.”

A partial transcript is below. Click “expand” to read more: 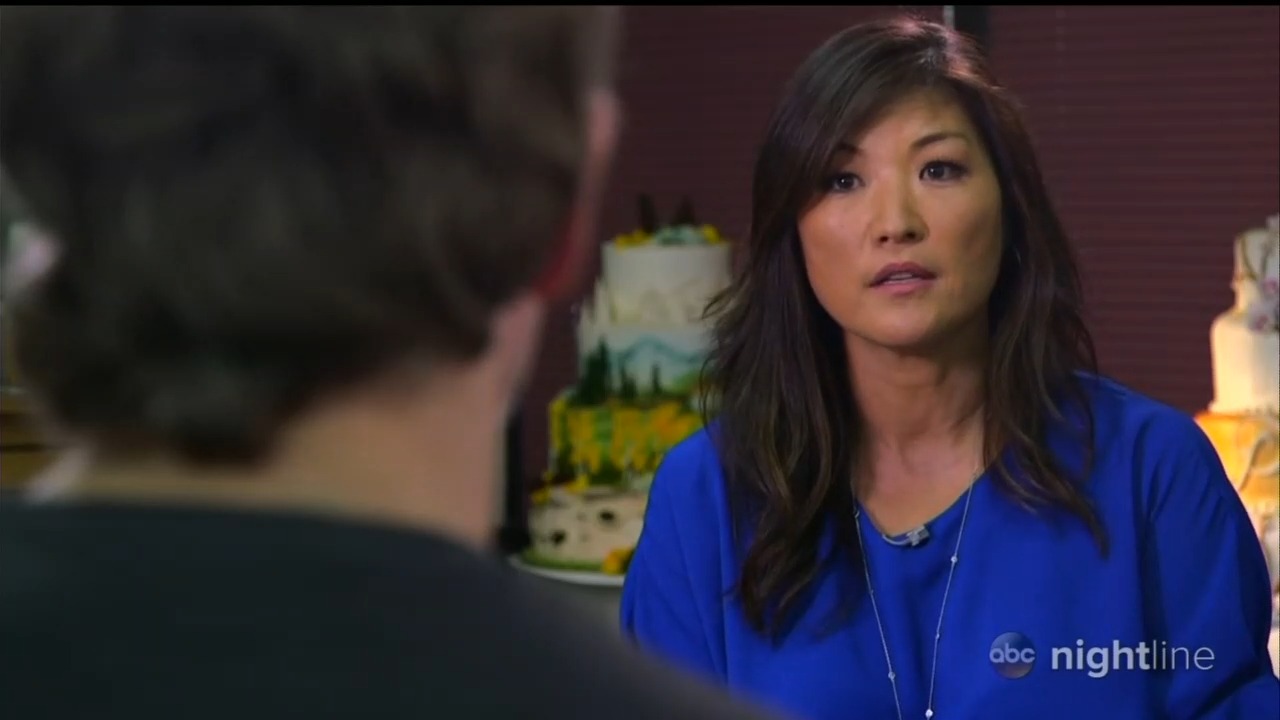 JUJU CHANG: A Supreme Court ruling today that could have ripple effects for businesses and the LGBT community across the country. The justices siding with the Christian baker who famously refused to create a wedding cake for a gay couple, saying his faith forbade it. Today, he is celebrating what he calls a victory for religious freedom, while the couple worries this could spark a nationwide backlash. Jack Phillips says he's not just a baker, he's an artist.

CHANG: Deeply religious, Phillips says his Christian faith guides everything in his life.... Including his refusal to bake a wedding cake for a gay couple.

JACK PHILLIPS: That cake is that strong of a message in our culture. And marriage in general between a man and I woman across all cultures, religions, is an inherently religions event.

CHANG: That faith part of an epic legal clash between religious liberty and gay rights. All of which began when Charlie Craig and Dave Mullins walked into Masterpiece cake shop in 2012.

CHANG: [To Phillips]: You don't see it as an act of discrimination?

PHILLIPS: I see it as an act of following my faith. It's not just a cake. It's an iconic symbol of a wedding.  This is a religious ceremony that goes in direct conflict with my faith.

CHARLIE CRAIG (Refused service): When I realized exactly what had happened in the car, you know, I broke down and started crying.

CHANG: That one encounter at this unassuming cake shop in Lakewood, Colorado —

WOMAN: Here's to your legal fee.

CHANG:  — Propelled both the cake baker and the couple into the center of a scorching national debate. That went all the way to the highest court in the land. And today in a 7-2 decision the Supreme Court ruled in favor of the baker.

CHANG: We were in Colorado just last week only days before today's far-reaching decision. For Mullins and Craig even over five years later that brief interaction still stings.

DAVE MULLINS: I was mortified. I mean, neither one of us had ever been treated this way before at a business.

CHANG: Encouraged by the public response, the couple filed a complaint with the Colorado Civil Rights Commission. Colorado is one of 21 states that prohibits discrimination based on sexual orientation. Colorado's civil rights commission ruled in favor of the couple. Describing the baker's refusal based on his religious beliefs as one of the most “despicable pieces of rhetoric.”  That decision was upheld by the Colorado court of appeals.

MULLINS: It made us feel like we were valued members of our community.

PHILLIPS:  It's not about hate. This is about not creating a message and a government forcing me too.

CHANG: Because people have called you a bigot.

PHILLIPS: I’m not. I serve everyone who comes in my store. I just don’t create every cake that people ask me to make.

CHANG: Aided by the Alliance Defending Freedom, a Christian advocacy organization, Phillips petitioned the Supreme Court to take his case.

PHILLIPS: We were asking the Court to look at it as creative professionals. Should they be forced to violate the first amendment, or deeply held religious beliefs to create art that violates those beliefs? Which is more important?

CHANG: Saying the state of Colorado violated his First Amendment rights of freedom of religion and speech. And there's the slippery slope of does this chip away at other artisans, whether it's a jeweler or a makeup artist or others who would then have the ability to essentially boycott gay marriages?

CHANG: The news that the Court would take up the case was a shock to everyone involved. The weight of both movements sitting squarely on their shoulders.  I know it's hard to predict how you will feel, but if it came down in your favor how would you react?

PHILLIPS: I would be probably overjoyed.

CHANG: Couldn't you create a generic wedding cake that would be available for anyone who walked in and then customized for certain people, or is that against the —

PHILLIPS: That would be sidestepping the issue.

CHANG: Today's ruling a narrow victory for religious rights advocates. At least four justices affirming gay rights, but ruling in favor of the baker because, ironically, they say it was he who faced anti-religious bias, calling out the Colorado Commission's language as disrespectful and hostile towards his sincere religious beliefs.

CHANG: LGBTQ groups, including GLAAD, worry this ruling could open the floodgates for bigotry —

GROUP CHANTING: We must love and support one another.

PHILLIPS: I can't answer for that. All I can say is that's not my belief at all.