While reminiscing about the life of Barbara Bush, all three networks on Wednesday noted her toughness and willingness to fight. On CBS This Morning, journalist Bob Schieffer called the former First Lady the “enforcer.” What none of the networks noted in their tributes is that Mrs. Bush wouldn’t hesitate to bluntly call out liberal media bias when she saw it.

During the 2000 Republican National Convention, as the party nominated her son, the family matriarch talked to then-Good Morning America co-host Charles Gibson. On August 2, 2000, Gibson demanded, “Is the party really ready to move to the center?” Mrs. Bush looked Gibson in the eyes and shot back: “I am wondering, is Al Gore going to be courageous enough to pick a vice president who is pro-life? Just a thought.”

According to a Nexis search from August 2 through August 8, 2000 (the date pro-choice Senator Joe Lieberman was picked as Gore’s running mate), it appears that ABC did not ask that question to the Democratic nominee.

In another moment of candor during the GMA segment, Mrs. Bush deflected a question on whether George H.W. Bush was bitter over his 1992 loss by zinging Bill Clinton’s impeachment.

CHARLES GIBSON: What do you mean?

BUSH: You know what I mean. 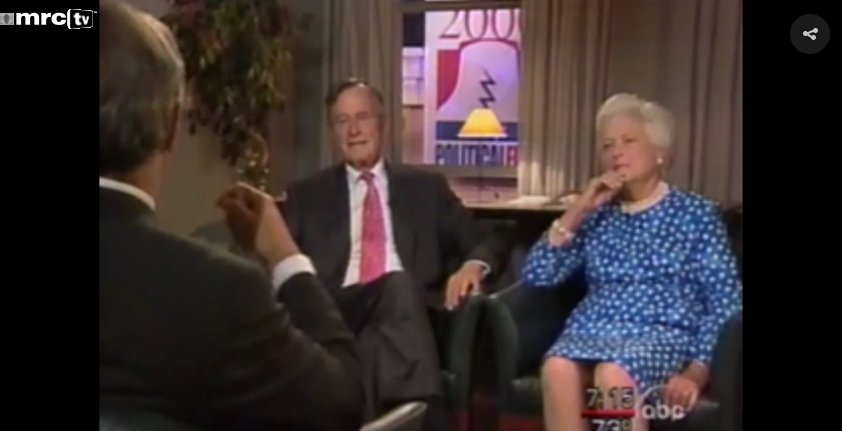 Mrs. Bush continued: “It’s the presidency that we hold up to a high standard.” She added that an “unnamed person” brought disrespect to the office of the presidency.

In August of 1992, the First Lady sparred with PBS’s Judy Woodruff about the Republican Convention. While Woodruff tossed softballs to Hillary Clinton, she grilled Mrs. Bush:

The First Lady took Woodruff to task: “Look you're saying nothing nice... where were you during the Democrat convention defending us?” Woodruff returned to her inquiry: “But Mosbacher who said in the last day or so that Gov. Clinton's alleged marital infidelity is a legitimate campaign issue.”

After a final attempt to get Mrs. Bush to respond, Bush let loose: “You didn't listen to the Democrat Convention I think... I'm not sure you've been [sic] to the same political year I've been to, Judy. Now c'mon, be fair." Mrs. Bush got in the last word: "I'm going to listen to your questions. I'm going to monitor you.”

Barbara Bush, a tough woman, especially when it came to nasty liberal questions.