There was no holding back on ABC’s Nightline, Tuesday. Host Juju Chang celebrated Hillary Clinton’s “epic” “milestone” and oddly suggested that the nomination of the liberal Democrat is a victory for “setting politics aside.” Chang opened the show by cheering, “Making history. It's official....  The epic moment, a milestone for women.”

Reporting live from the Democratic National Convention, the journalist enthused, “The crowd is going berserk. Every delegate in this hall recognizes that they are a part of a moment in history. They managed to set politics aside and help Hillary Clinton break through that political glass ceiling.”

Chang almost got emotional, hyping, “The ground-breaking nomination a poetic end to a hard-fought primary race.” (In 2007, ABC asserted that Barack Obama was the one with “fluid poetry” and Clinton had the “hot factor.”) As for the "milestone for women," Nightline is the same show that mocked Sarah Palin as a "Barbie" doll.

On Monday’s Nightline, reporter David Wright flatly declared that “objectively, Hillary is much more qualified” than her husband was in 1992. 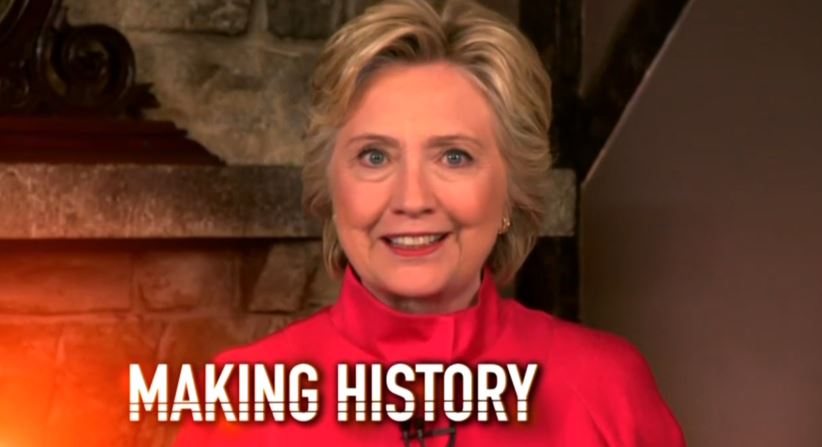 HILLARY CLINTON: We just put the biggest crack in that glass ceiling yet.

CHANG: Hillary Clinton now the first woman in America to top the presidential ticket of a major political party.

BILL CLINTON: She's the best darn changemaker I ever met in my entire life.

CHANG: The dramatic roll call. But emotions still running high for Bernie Sanders. And the epic moment, a milestone for women. 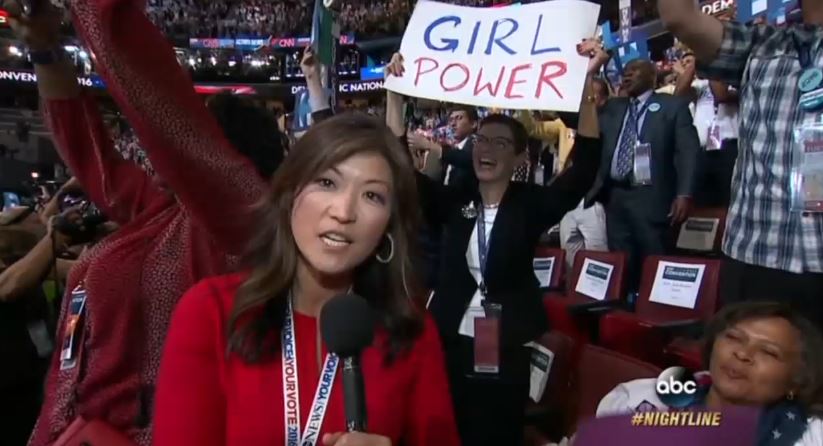 CHANG: Good evening from the Democratic National Convention. A truly historic moment right here in this arena in Philadelphia tonight. Hillary Clinton capturing the Democratic nomination for president 96 years after American women first got the right to vote. Clinton is now the first woman to lead a major party ticket into the general election. An emotional night for so many, including former President bill Clinton who called his wife “he best change maker there is."

CLINTON: What an incredible honor that you have given me. And I can't believe we just put the biggest crack in that glass ceiling yet.

CHANG: Late tonight, presidents of the past and a dramatic unveiling. Hillary Rodham Clinton addressing the Democratic National Convention floor via satellite in a historic triumph.

CLINTON: If there are any little girls out there who stayed up late to watch, let me just say: I may become the first woman president, but one of you is next.

CHANG: The ground-breaking nomination a poetic end to a hard-fought primary race.

CHANG: The crowd is going berserk. Every delegate in this hall recognizes that they are a part of a moment in history. They managed to set politics aside and help Hillary Clinton break through that political glass ceiling. Tonight, Hillary Clinton tweeting one word. History. Earlier tonight, during roll call, Hillary's childhood friend and delegate Betsy Ebeling tearing up as she cast votes for her home state of Illinois. [To Betsy Ebeling] Tell me about the historic moment, this idea that she could be the first female president of these United States.