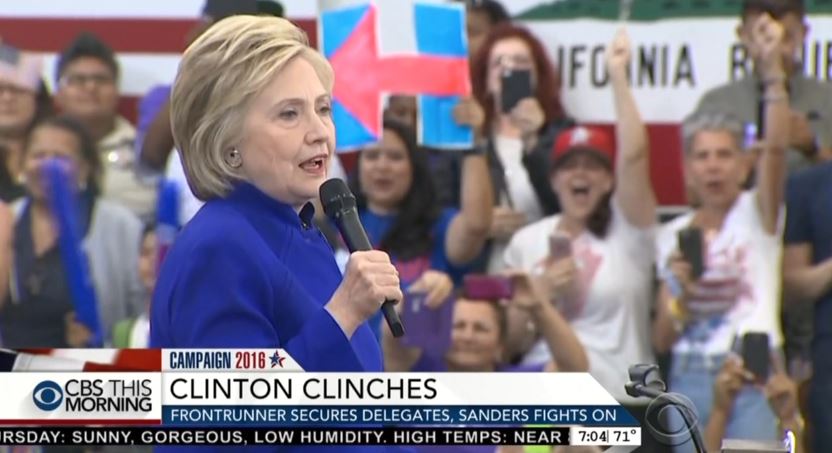 With Hillary Clinton on the verge of officially becoming the Democratic nominee for president, outlets such as the Washington Post and U.S. News are not holding back. “It’s Hillary; it’s History” and “For a generation of women pushing against the limits, a singular triumph” are two examples.

On the front page of Tuesday’s Washington Post, Karen Tumulty rhapsodized, “Hers was an earnest generation of feminists who decided that nothing was beyond them. They could choose their careers, build unshakable marriages and raise nearly perfect children. They could go out and change the world, yet still be there for their friends.”

Tumulty began her piece by lauding, “Hillary Clinton has been part of our national consciousness for so long that it is easy to forget how far she has pushed the edges.” The inside headline offered more inspirational acclaim: “Hillary Clinton’s history: stumble, get up, try again.”

The Post writer never once mentioned scandals such as her e-mail server or Benghazi. Instead, writing of the 2008 campaign, Tumulty extolled, “It was never much in doubt that she would try again, because that is her laborious way. She is determined to make history, and she has; what she will never do is make it look easy."

Over at U.S. News and World Reports, managing editor Robert Schlesinger’s story included this headline: “It’s Hillary; it’s History.” The sub-headline lectured, “Regardless of your feelings for Hillary Clinton, savor her clinching the nomination.”

The tone continued as Schlesinger told people to just get excited, “It's a moment in history and sometimes such instants sneak up on us: We get so caught up in the moment-to-moment trench warfare that we lose sight of history until it's upon us.”

At one point, he openly declared, “If you're like me you hope that this is the first of a string of historic moments of increasing importance – actual nomination; victory; inauguration – that will overshadow this one. This is a moment in history but it's a beginning, not an end.”

As with the Washington Post, there was no mention of scandal. On Monday, a NPR reporter told Clinton that women weep over history-making Clinton.