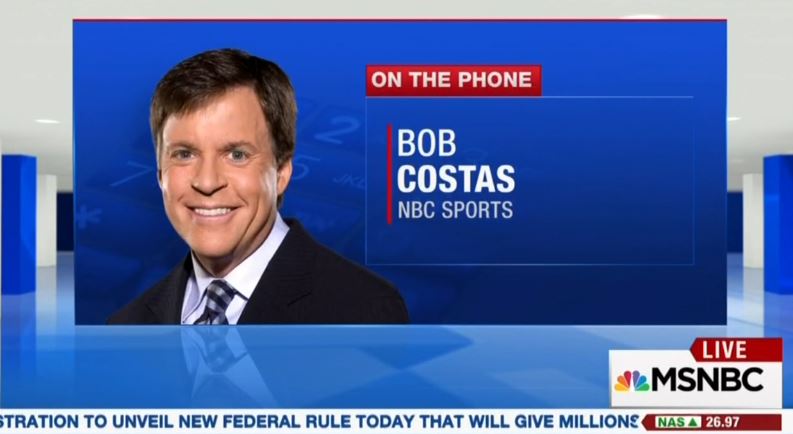 Despite the fact that an overwhelming amount of Native Americans do not find the Washington Redskins team name offensive, Bob Costas thinks he knows better. The liberal sportscaster on Friday talked to the Washington Post and ignored the impact of a new poll finding 90 percent support for the moniker.

He lectured, “This is a football issue and there is a distinction between this issue and others that might be influenced by political correctness run amok, and it is simply this: Every dictionary defines Redskin as an insult, a slur, a derogatory or pejorative term.”

Costas added, “That is what separates it from names like Chiefs, Braves or Warriors, which are not, by definition, offensive.”

According to the sportscaster, this counts as a “legitimate basis” for opposing the name and he will continue to do so, regardless of what actual Native Americans think.

In 2013, Costas went used a football half time show to lecture America: “Redskins can’t possibly honor a heritage or a noble character trait. Nor can it possibly be considered a neutral term. It’s an insult, a slur, no matter how benign the present-day intent.”

Not all writers are so stubborn. The Washington Post’s Robert McCartney announced on Friday he was dropping opposition to the name after the poll:

“It’s humbling to admit it, but Dan Snyder wins.

A Washington Post poll has confirmed that the vast majority of American Indians don’t consider the name of Washington’s professional football team to be offensive.

“Why should this bother me? After all, I’m a longtime, devoted fan of the burgundy and gold. A season ticket holder for more than a decade. Most of my fellow fans will feel relief and vindication that 9 out of 10 Native Americans judge the name to be innocent — just as team owner Snyder and the National Football League have said all along.

It feels presumptuous for us to say we know Indians’ interests better than they do. We can’t credibly claim that 9 out of 10 Indians somehow just don’t realize they’re being insulted. Some Indians told The Post that they actively support the name, because its use means Native Americans haven’t been forgotten.

In 2011, Costas used another half time to insult American gun owners.