While ABC journalists grilled Ted Cruz on Monday with a Good Morning America town hall, they offered softballs to Hillary Clinton on Thursday. George Stephanopoulos and Robin Roberts showcased questions from the left and included queries about hot sauce and Saturday Night Live. At no time was there a question on Benghazi or the Democrat’s secret e-mail server and the scandal around it. (For more on that, go here.)

The tone started early as Robin Roberts teased the special program: “Clinton flying high, fresh off that huge victory in New York.” In another tease, Roberts promised that the candidate would “answer her toughest critics.” She didn’t. Instead, ABC allowed a Clinton super delegate/Democratic congressman to ask a question.

GEORGE STEPHANOPOULOS: You guys are both also competing for super delegates. We've got a super delegate with a question. Pennsylvania Congressman Brendan Boyle. 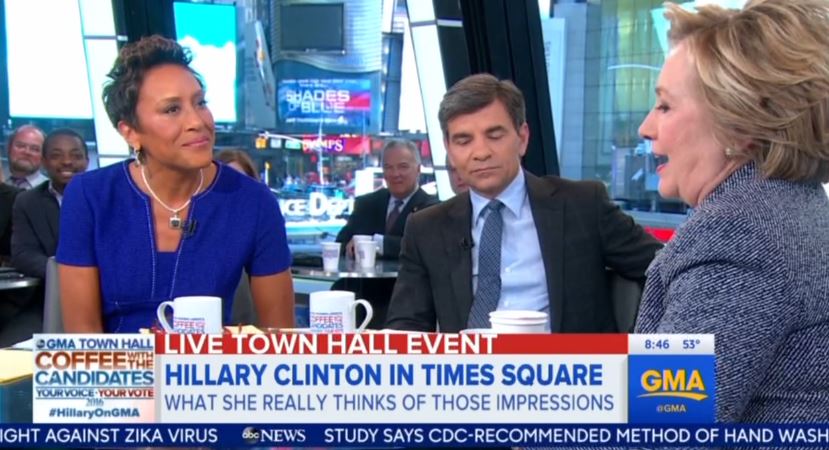 BRENDAN BOYLE (D-PA/Uncommitted super delegate): As one of the youngest members of Congress, I've been struck by how many voters in their 20s and 30s have been motivated and excited by Bernie Sanders. I was wondering what you would say to those voters as to why you're the best choice and what we can do even after this election to make sure these voters stay engaged?

Does that qualify as a “tough critic?” Later, Roberts played an old clip of Clinton on GMA “talking about equality.” After a snippet of the then-First Lady talking about the pay gap, she lobbed this softball: “For as long as we can remember seeing you in the spotlight, you have been fighting for others.”

Other such easy questions include these groan-inducers from the audience: 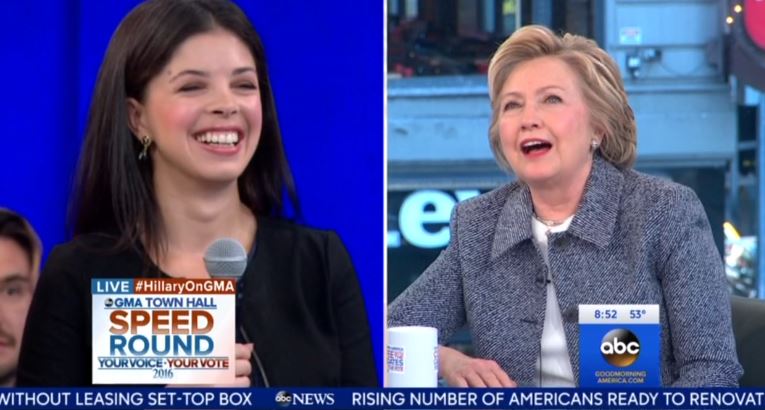 ROD: you and I have something in common. We both put hot sauce in everything. So, I have to ask you. Sriracha? Tabasco or Tapatio or what?

CHRISTINA GONZALEZ? My question for you is what would you say is Bill's most annoying habit?

In contrast, Cruz’s town hall featured hard-hitting questions like this: 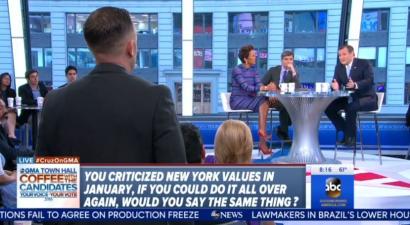 LUKE LETLOW: Senator Cruz, some people suggest that you’ve developed a reputation in the Senate for being an obstructionist and are often unable to work with your colleagues on both sides of the aisle. 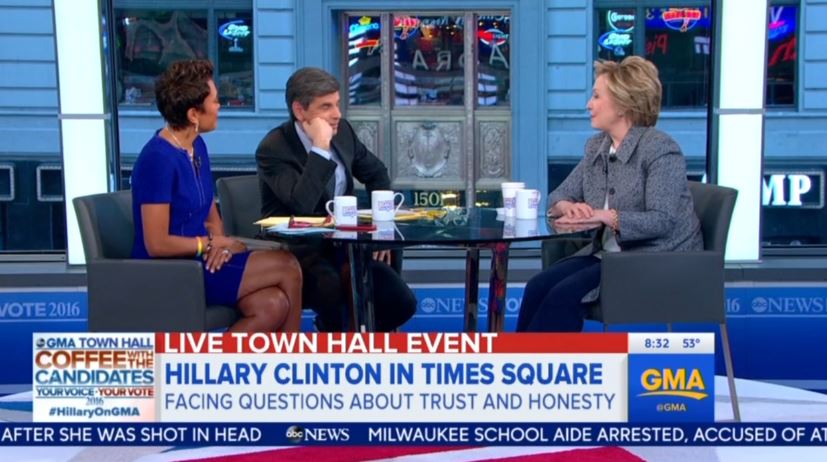 (For more on the Cruz town hall, go here.) The GMA co-hosts also played a video montage of Cruz’s opponents trashing him. This is a stark difference to Clinton’s softballs. On the rare occasion that someone pressed the Democrat, such as when a voter asked about trust, the ABC journalists never followed-up or pressed Clinton on her scandals.

A transcript of the questions and partial Clinton answers can be found below:

ROBERTS: She's here live in Times Square this morning answering your questions in our town hall only on GMA.

HILLARY CLINTON: Let’s go out and win this election!

ROBIN ROBERTS: Taking your questions right here and across the country. How she answers her toughest critics.

ROBERTS: They have their questions ready, as well. So, let's not wait anymore. Let’s welcome our special guest Democratic presidential candidate Hillary Clinton.

STEPHANOPOULOS: We to start out with some news. Donald Trump on the stump last night already looking, already looking ahead to the general election. Let's take a look.

DONALD TRUMP: We are going to beat crooked Hillary. She makes bad decisions. You know what Bernie Sanders said about her twice, you know that. Number one, he said she wasn't qualified. That's tough. I mean, that's tough. But he said bad judgment.

CLINTON: Hmm. You think so? [ Laughter ] You know, George, I am not going to be responding to all the crazy stuff he says. I think we're going to talk about what's going to be good for America, how we're going to make our country —  provide the potential and promise that every person in this country should be able to take advantage of. That’s what I’ve worked on.

STEPHANOPOULOS: But he's picking up the attacks of Bernie Sanders right there. Your campaign has said that Senator Sanders was on a destructive path. Is it time for him to get out of the race?

CLINTON: That’s up to him.

ROBERTS:  You had a big victory, of course, here in your adopted home state.

ROBERTS: On Tuesday and after that you were speaking in part to Bernie Sanders' supporters and says there's more that unites us than divides us. So how do you unite everyone?

STEPHANOPOULOS: You guys are both also competing for super delegates. We’ve got a super delegate with a question. Pennsylvania Congressman Brendan Boyle.

BRENDAN BOYLE (D-PA/Uncommitted super delegate): As one of the youngest members of Congress I've been struck by how many voters in their 20s and 30s have been motivated and excited by Bernie Sanders. I was wondering what you would say to those voters as to why you're the best choice and what we can do even after this election to make sure these voters stay engaged?

ROBERTS: Well, thank you for answering our questions. You want to hear from the people. It is about your voice, your vote. And Lara is with a voter now.

LARA SPENCER: I am. With Devin Deford, who a student at Morgan state in Baltimore. You are currently a Sanders supporter. Let's see if Secretary Clinton can change that right now. What is your question, Devin.

CLINTON: And that's been your position for several weeks right now but do you have any regrets about giving those speeches?

STEPHANOPOULOS: Lara has got another question.

SPENCER: I do, indeed, George. I'm here with William Cobb. He is from Philadelphia, Pennsylvania, one of the huge states up for grabs next week. He says currently undecided. Possibly leaning towards Sanders at the moment. What is your question for Secretary Clinton?

COBB: I served six years in prison for robbery which is a violent crime. Upon my release in 2000 I worked extremely hard to restore my life. It was extremely difficult, though, because of 44,000 collateral consequences, many resulting from the crime bill you previously supported. As a result, if you're elected president of the United States, how much money will you attach to efforts that are legislation and efforts that are aimed at restoring the lives of the people in the communities that have been impacted adversely by the 1994 crime bill?

ROB MARCIANO: Of course, outside we have a slew of Hillary Clinton supporters. This is Alex who is 17 now. When do you turn 18?

MARCIANO: You can't wait to vote from New Jersey so that's going to happen.

ALEX: Yes, New Jersey is a very important primary coming out and showing our support. Excitement and energy is all that we're about. We want to show Hillary Clinton we are committed every step of the way.

MARCIANO: All right. I gotta go. Here’s your local forecast.

ROBERTS: Welcome back to Times Square on GMA. Our town hall with Hillary Clinton live here in Times Square. All across the country answering your questions as the presidential race come to such a critical point. What I appreciate even during the commercial break you're engaging people. It’s an opportunity for them to have a conversation with you and you're taking full advantage of that.

CLINTON: Well, that’s what I like most about being in politics and public life.

CECILIA VEGA [In a Pennsylvania diner] Well, I'll tell you, George, the food looks really good here, guys. Good morning, Madam Secretary. I'm here with Kim Klayman. She is a 27-year-old business and finance attorney. She is a supporter of yours and she's got a question for you this morning.

KIM KLAYMAN (Philadelphia, PA Clinton Supporter): Good morning, secretary Clinton. I'm a registered Democrat and I support you. However, I have a 20-year-old brother who says that he supports Bernie because he doesn't trust you. What would you say to change his mind?

STEPHANOPOULOS: You said you've been attracting these attacks for a long time. Clearly this comes up a lot. You’ve said you're still trying to figure out why. And you do have a problem going forward with the polls, a majority of Americans say they don't trust you. What is behind it?

CLINTON: George, I don’t know. Other than the fact that for 25 years, you know, when I worked on health care, as you well remember, I was subjected to an enormous wave of attacks and it hasn't stopped.

STEPHANOPOULOS: Is there anything more you can do to address it?

NORA MILLER: Good morning, Secretary Clinton. My name is Nora. I am retired. My question is what is your greatest political regret? Thank you.

SPENCER: I’m with Evan Nison. Evan is leaning towards Senator Sanders but has a question for you.

EVAN NISON: Hi. I'm the youngest member of the board of NORML, the National Organization for the Reform of Marijuana laws and I’m also on the board of Students for Sensible Drug Policy. I know that you’ve said in the past you'd respect the will of the voters in states that chose to legalize marijuana. But I want to know if marijuana legalization was on the ballot in your state if you'd vote yes or no.

ROBERTS: Amy, you have another social question?

AMY ROBACH: That’s right. Another one coming in from California. Georgette Elcochar [PH] has a question about women and pay gap.

GEORGETTE: My daughter is entering the workforce. It's 2016 and we still have a pay gap. How do you plan to address it and/or attack it?

CLINTON: Well, you are 100 percent right, because there still is a pay gap.

GEORGE STEPHANOPOULOS: So it turns out there have been six SNL cast members who have played you since you were First Lady.

STEPHANOPOULOS: We’re going to take a look at some of them.

STEPHANOPOULOS: Okay. I know you don't like to play favorites but who comes closest to the real Hillary?

ROBERTS: But it's obvious you're a very good sport about this and you alluded to it a little bit there that you actually can learn a little bit about yourself, watching this [SNL].

ROBERTS: You know, speaking of back, this is throwback Thursday and we went into the GMA vault and found your first appearance here on Good Morning America in 1988.

ROBERTS: Yes, when you were speaking out about your lawyer and talking about equality and such. You talked to Charlie Gibson. Here it is.

ROBERTS: [In response to video clip.] For as long as we can remember seeing you in the spotlight you have been fighting for others.

ROD: you and I have something in common. We both put hot sauce in everything. So, I have to ask you. Sriracha? Tabasco or Tapatio or what?

CHRISTINA GONZALEZ? My question for you is what would you say is Bill's most annoying habit?