Good Morning America journalist Terry Moran on Monday hailed Pope Francis’s “unforgettable” meeting with the “revolutionary” Fidel Castro. Moran also skimped on coverage of protesters who spoke out. The reporter gushed, “An unforgettable moment: The Pope meets with Fidel Castro, the 89-year-old revolutionary and a Pope who is shaking up the world, too.”

Moran found time to note that Francis “celebrated mass with a huge image of Che Guevara, the famous atheist communist rebel looming above it all.” Yet, his mention of protesters was awkward and brief. First, the journalist noted that children “loved” seeing the Pope. He then added, “As Francis arrived at the square, a protester tries to reach the Pope. A brief encounter and then he gets dragged away.”

Right after that comment, the pre-taped segment ended and Moran exclaimed, “It was a lot of fun, for them and so many Cuban Catholics.” Well, probably not fun for the man who was dragged away. (Obviously, the segment was poorly edited.) 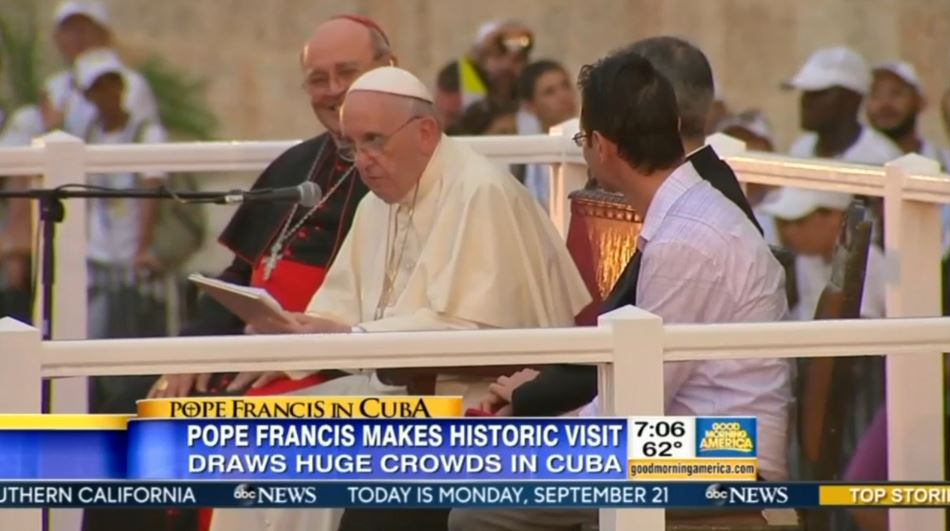 That was all the time Moran could manage for protests against communist oppression in Cuba.

ABC has a long history of gushing over Castro. In 2014, veteran anchor Barbara Walters lauded him as “maybe the most charismatic person I have met.” In 2002, Walters heralded:

"For Castro, freedom starts with education. And if literacy alone were the yardstick, Cuba would rank as one of the freest nations on Earth. The literacy rate is 96 percent."
– Barbara Walters narrating her interview with Fidel Castro on ABC's 20/20, October 11, 2002.

A transcript of the September 21 GMA segment is below: 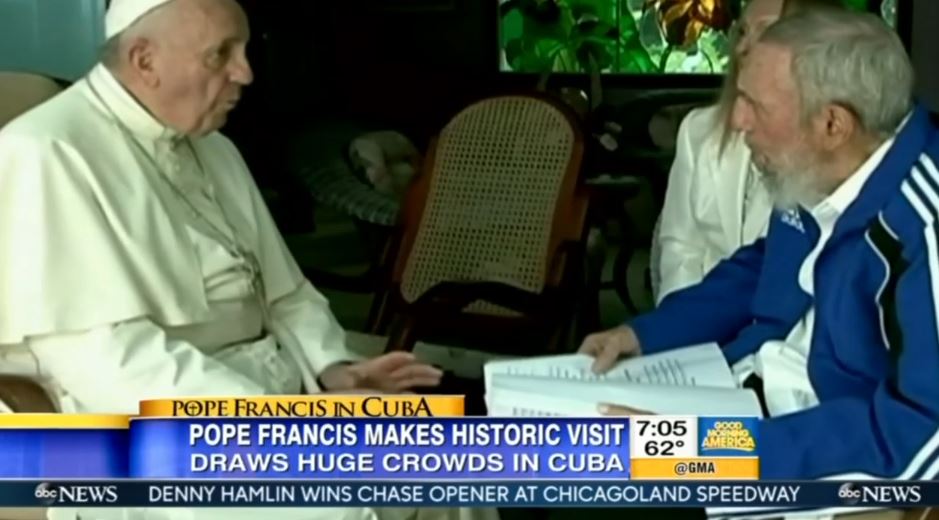 ROBIN ROBERTS: Now to the Pope's historic visit to Cuba and the U.S. Pope Francis drawing enormous crowds in Cuba, meeting with former leader Fidel Castro. As excitement builds for his arrival here. ABC’s Terry Moran is with the Pope in Havana this morning.

TERRY MORAN: This is the Pope’s last day in Cuba before he heads to the United States. He's leaving Havana for two other cities Santiago and Holguin. This was a trip that supposed to be purely inspirational for Cuba, but it’s been touched by protest and controversy. An unforgettable moment, the Pope meets with Fidel Castro. The 89-year-old revolutionary and a Pope who is shaking up the world, too. A jubilant welcome to the Pope from the hundreds of young Cubans here last night. And Francis spoke to them off the cuff, sharing his very untraditional vision of a church that must never become too insolent. “When a religion becomes a convent, it loses the best thing it has,” he says. “It becomes about ‘I'm good, you're bad.’ Moral prediction.” 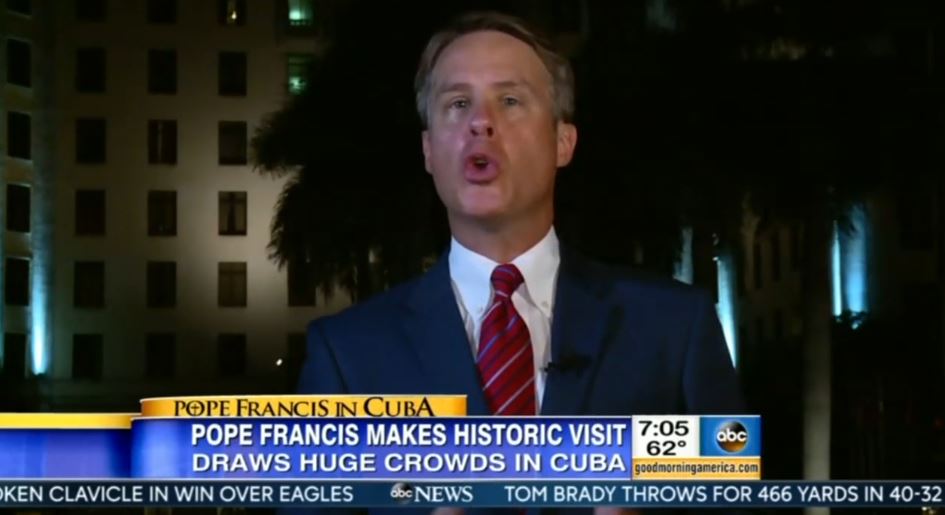 Earlier Sunday in Revolution Square, thousands greeted Francis in the sweltering heat, waving flags, reaching out to him. He celebrated mass with a huge image of Che Guevara, the famous atheist communist rebel looming above it all. A profoundly moving experience for so many. And the kids loved it too. How was it to see the Pope? [ Speaking to kids through translater.] “I'm excited,” she says. “I was like, hooray, it's the Pope. We had a lot of fun.” But as Francis arrived at the square, a dramatic scene. A protester tries to reach the Pope. A brief encounter and then he gets dragged away. [End taped segment.] It was a lot of fun, for them and so many Cuban Catholics. The Pope will travel 90 mile across the Florida straits to the United States. But really, it's just a world way from here. George?

GEORGE STEPHANOPOULOS: Certainly is. Okay, Terry thanks very much.