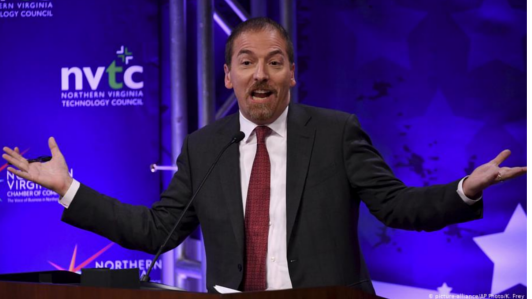 Longtime activist Ralph Nader doesn’t make news much these days, but the former presidential candidate still calls out problems that get his attention.

His latest opinion piece on Thursday criticized Meet the Press host Chuck Todd, whom he described as “everything wrong with the U.S. media” because the NBC anchor has “allowed his hands to be shackled” with the “golden handcuffs” of corporate bias.

The article singled out Todd, whom Nader described as “symptomatic of the media’s indifference to showcasing labor leaders."

Even then, little space has been devoted to ”labor policies, labor reforms, worker safety, the persistent private pension crisis and the huge power imbalance in labor/management relations.”

The activist referred to the liberal anchor as a “quick-witted former citizen organizer” who “has lost control of his show to his corporate masters in New York City.”

As part of the problem, Todd “cannot even stop them from replacing his show entirely on the few Sundays when the NBC profiteers think there are more profits showing a major tennis, golf or soccer tournament.”

Nader also noted: “Obviously, Chuck is working in a tough environment for any self-respecting journalist.”

As a result, the Sunday morning host “has become a ditto-head to the regular news shows’ saturation coverage” and has failed to the point that his reporting has become “[r]epetitious and dull" because he adds “nothing new for the audience.”

The radical left, whom Nader has redefined as the "civic community," is the "fountainhead for our democratic society."

As a group, he noted, citizens continue to be “watchdogs, documenting, litigating, lobbying and pushing the powers that be on behalf of the American people.”

In the past, such actions led to “[i]mproved civil rights and liberties, safer consumer products, workplace conditions and environments, nuclear arms treaties,” which all “began this way.”

However, the “civic leaders of today are largely shut out from these forums,” he stated. “Civic startups cannot reach larger audiences and shape the politics of the day.”

None of this is unknown to Chuck Todd. He has allowed his hands to be tied with golden handcuffs.

One can almost sense his impatience with his roundtable guests spouting guarded opinions or conventional speculations suited to their current careers.

Of course, the activist added, the shrinkage of Meet the Press “has been going on for some years. It focuses, with other network shows, on questioning politicians or their surrogates -- sometimes the same guests on multiple shows -- about inconsistencies, gaffes, thoughtless statements or current political controversies."

“While Todd can be a tough questioner,” Nader stated, “he is trapped in a cul-de-sac of predictability, trivia and redundancy that demeans his talents.”

He concluded that “Todd has much more potential than to continue his role as an anchor of a withering show ‘brought to you by Boeing.’ He should request reassignment or resign for more significant journalistic challenges.”