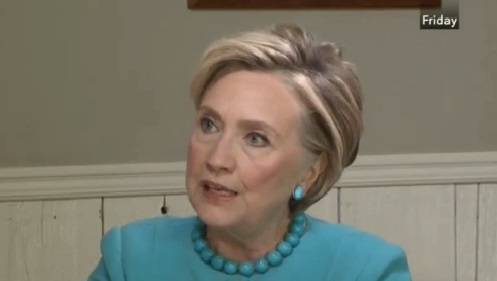 In an interview Monday with C-SPAN, Hillary Clinton denied that any of the new stories on Russian manipulation of the Clintons and the world uranium market are true. In other words, any bad news about the Clintons is somehow...."fake news."

C-SPAN host Steve Scully noted Sean Hannity said this uranium story is the real Russian-collusion story. “I would say it’s the same bologna they’ve been peddling for years,” Mrs. Clinton claimed, “and there’s been no credible evidence by anyone. In fact, it’s been debunked repeatedly and will continue to be debunked.” She continued:

But here is what they are doing, and I have to give them credit. Trump and his allies -- including Fox News -- are really experts at distraction and diversion.

So the closer the investigation about real Russian ties between Trump associates and real Russians, as we heard Jeff Sessions finally admit to in his testimony the other day, the more they want to just throw mud on the wall.”

“I’m their favorite target,” Clinton added. “Me and President Obama, we are the ones they like to put in the cross hairs,” she said.

However, according to an article written by Robert Donachie, Capitol Hill and health-care reporter for the Daily Caller website, “Clinton did not back up her assertion the reports are bogus with hard evidence.”

The Times reported in April of 2015 that “the Clintons had a hand in helping a Russian energy company obtain drilling rights in the U.S.,” Donachie noted.

The company “had to get State Department help to purchase the Canadian company Uranium One, which made the Russian agency -- Rosatom -- one of the largest uranium producers in the world,” he stated.

“Frank Giustra, a major mining investor in Canada and owner of UrAsia, won a landmark uranium deal in Kazakhstan just days after visiting with Mr. Clinton,” Donachie indicated. “The two men boarded Mr. Giustra’s private jet to Kazakhstan, where they met with the country’s autocratic president, Nursultan A. Nazarbayev.”

Giustra later “donated some $31.3 million to the Clinton Foundation,” and “five months later, he held a fund-raiser for the joint Clinton Giustra Sustainable Growth Initiative, where he alone pledged $100 million,” Donachie indicated.

“UrAsia then merged with Uranium One,” the reporter noted, “and almost immediately, the new company began picking up uranium holdings in the United States. The company soon purchased in excess of 38,000 acres of across Texas, New Mexico, Wyoming, Utah and other western states as well.”

“Some $8.65 million in donations were made to the Clinton Foundation by Uranium One and former UrAsia investors between 2008 and 2012,” Donachie stated.

As NewsBusters previously reported on Tuesday, October 17, The Hill announced new revelations in the scandal surrounding Russia’s obtaining control of American uranium and its payments to the Clinton Foundation in a move that received little coverage on ABC, CBS and NBC.

On Wednesday, the new revelations -- which involved millions of dollars in kickback money to the Clinton Foundation -- were still avoided by the ABC, CBS and NBC network evening or morning news shows.

In a statement to the press that same day, President Donald Trump also scolded the liberal media for going out of their way to protect Hillary Clinton.

The mainstream media does not want to cover that story because that affects people that they protect. So they don't like covering that story.

But the big story is uranium and how Russia got 20 percent of our uranium. Frankly, it's a disgrace.

It’s apparently not enough for Hillary Clinton to try remaining relevant after losing the 2016 presidential election. Now she’s back to a familiar role: denying any information that might incriminate her or anyone in her family.