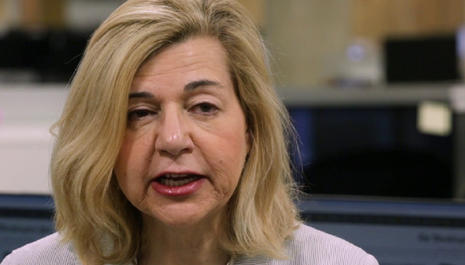 On Sunday, Margaret Sullivan wrote her final column for the Washington Post, and unsurprisingly it was chock full of her overriding obsession with Donald Trump. Even the title of her swan song hinted at her obsession with Trump: My final column: 2024 and the dangers ahead.

Hmmm... "2024 and the dangers ahead?" Guess what, or rather who, she is referring to here. In case you have any doubt, the picture of you-know-who just below the title and the article itself resolves it for you starting with the very first paragraph.

After a recent announcement that I’ve decided to retire this column and leave The Washington Post, a Vanity Fair reporter asked me by email about the media’s performance in covering threats to democracy. That certainly was a fair question, since it’s been one of my most frequent subjects here.

Yes, what you label "threats to democracy" as personified by Donald Trump has certainly been your most frequent TDS subject as you elaborate in your second paragraph as the sum of all your fears:

I’m “encouraged one day, despairing the next,” I told her, adding that the next election cycle is going to be a real test for the reality-based press.

The rest of the article urges the press to completely ditch objectivity (Solidarity Journalism) when covering the "democracy-threatening" Trump.

Here’s the good news: The media has come a long, long way in figuring out how to cover the democracy-threatening ways of Donald Trump and his allies, including his stalwart helpers in right-wing media. It is now common to see headlines and stories that plainly refer to some politicians as “election deniers,” and journalists are far less hesitant to use the blunt and clarifying word “lie” to describe Trump’s false statements. That includes, of course, the former president’s near-constant campaign to claim that the 2020 presidential election was rigged to prevent him from keeping the White House.

I’m often reminded of the troubling questions raised by ABC News’s Jonathan Karl in multiple interviews late last year about what it would mean to cover Trump if and when he runs for president again. He deemed it perhaps the greatest challenge American political reporters will ever face.

Straight shooter? Only in the universe where everybody is infected with TDS.

And now we return to Margaret's pleas for help since it appears she would be mentally unable to survive a certain unthinkable (for her) 2024 election outcome.

The deeper question is whether news organizations can break free of their hidebound practices — the love of political conflict, the addiction to elections as a horse race — to address those concerns effectively.

For the sake of democracy, they must.

They must! They must break free of any lingering "hidebound practices" of fair coverage. They must! ...Help!

One thing is certain. News outlets can’t continue to do speech, rally and debate coverage — the heart of campaign reporting — in the same old way. They will need to lean less on knee-jerk live coverage and more on reporting that relentlessly provides meaningful context.

So my prescription — and it’s only a start — is less live campaign coverage, more context and thoughtful framing, and more fearless straight talk from news leaders about what’s at stake and why politics coverage looks different. The latter could take many forms: editors’ notes on stories, columns written by news directors and posted prominently on websites, public appearances, and more.

I hope that newsroom leaders are thinking hard about moving outside their long-standing practices as the presidential campaign approaches. This will not be a traditional contest, and the stakes are high. We simply have to get it right.

Yet another plea for Solidarity Journalism.

A final, and personal, word. As I wrap up a 42-year newspaper career, I’m deeply grateful to those of you who have read my Post columns over the past six years, and to those who have written or called me to offer constructive comments or suggestions. And yes, sometimes to correct or (respectfully) disagree.

It has been one of the greatest privileges of my life to write for the legendary Washington Post — the very newspaper that inspired a teenage girl awed by its Watergate reporting to get into journalism in the first place.