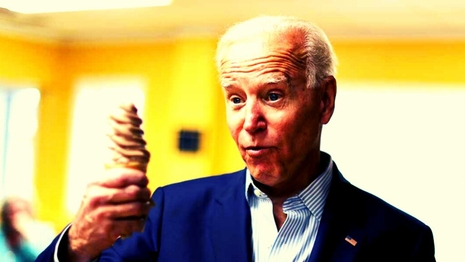 How do you make a funny meme even funnier than it originally was? By fact checking it by a major news organization. For some reason, on July 31, the "Reuters Fact Check" unit pounced on a YouTube video from September 12, 2021.

In real life, President Biden mysteriously walked away from his wife's speech for a few seconds. In the video, they added an ice cream truck driving by to "explain" Biden's walking away. Maybe Reuters was newly alarmed because it has 384,000 views. Because it's funny.

What brought it back to an even funnier encore was a fact check by Reuters on Sunday telling us that, no, Joe Biden really didn't follow an ice cream truck in the middle of his wife's remarks.

It began with its title that urgently informed readers that "Fact Check-Video does not show Biden being distracted by music from an ice cream truck."

...The original video was posted on C-SPAN (here) on Sept. 10, 2021 with the caption: “President Biden and first lady Jill Biden spoke at Washington, D.C.'s Brookland Middle School about the coronavirus pandemic and keeping children safe. The president urged parents to get their children vaccinated if they were eligible.”

At around the 01:35 mark, Biden can be seen walking out of frame and returning a few seconds later, but no ice cream truck can be seen in the video nor can any music be heard.

Wow! We never would have figured out that the original video was altered to include an ice cream truck image and music had it not been for that ground-breaking Reuters fact check.  Of course, that Reuters made the original meme even more popular due to the widespread mockery of its laughable "fact check." They accidently upped the humor quotient.

Bonchie at RedState made the best point, about how Reuters is fact-checking mockery of Biden, but they're not fact-checking what Biden says (or tweets).

If you look at the Reuters Fact Check pages for the last month or so, there's a pile of Biden-defensive checks, and zero checks on Biden (or anyone on his team). So before the July 31 Ice Cream event, there was:

-- July 29: The Atlantic did not not publish a headline on ‘the quiet courage’ of Biden’s economy

-- July 28: Biden did not sign a “Drag Queen Initiative” that would outlaw “publicly criticizing pedophiles.”

-- July 11: Sylvester Stallone was not photographed wearing an "FU 46" T-shirt.

-- July 8: Biden didn't put a Medal of Honor backwards on a Vietnam War veteran at the White House.

"Fact checkers" can do an accurate job of calling out fakes, and yet still look comically biased in their selection of what needs checking.