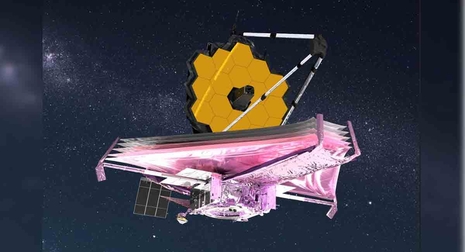 First a disclaimer. That is not a headline from the Babylon Bee. It is an actual MSN headline of a July 13 story about the first amazing images seen from the James Webb Space Telescope. How can it be homophobic?

MSN is borrowing from "INTO," which calls itself "A Digital Magazine for the Modern Queer World."

While most people were amazed by the images sent by the Webb Telescope -- which is so powerful it can peer back almost to the beginning of time -- MSN's article was absurdly obsessed with the man it was named after. The "crime" of James Webb -- not to be confused with the one-term senator from Virginia -- was that he seemed to have been present in the State Department and later at NASA as administrator when what was labeled a "Lavender Scare" was happening.

Here is MSN's bizarre obsession in the midst of the transmission of the first amazing images from the telescope they now want renamed:

NASA has shared the James Webb Space Telescope’s (JWST) first high-resolution images of deep space, including some galaxies pictured 13 billion years ago—not long after the Big Bang. But despite this remarkable achievement for science, the JWST continues to stand as a bitter reminder of our country’s willingness to tolerate and even memorialize queerphobia.

The JWST first came under controversy last year when it came to light that its namesake, James Webb, oversaw the Lavender Scare during his tenure as NASA’s second administrator. The Lavender Scare was a McCarthy-era moral panic in which suspected queer employees were exposed and purged from government positions.

Of particular concern was the firing of NASA employee Clifford L. Norton as a result of “‘immoral conduct’ and for possessing personality traits which render him ‘unsuitable for further Government employment.’” This took place after the Lavender Scare, while Webb was still administrator in charge of these kinds of security investigations.

The story goes on and on like this while completely forgetting the successful mission of the "homophobic telescope." Unfortunately for the premise hyped by MSN, the author of The Lavender Scare exonerated James Webb:

David Johnson, a historian at the University of South Florida in Tampa who wrote the 2004 book The Lavender Scare, says he knows of no evidence that Webb led or instigated persecution. Webb did attend a White House meeting on the threat allegedly posed by gay people, but the context of the meeting was to contain the hysteria that members of Congress were stirring up. “I don’t see him as having any sort of leadership role in the lavender scare,” says Johnson.

And many years later MSN and INTO appears to be guilty of stirring up politically motivated victimhood hysteria against James Webb to the extent that they are willing to be mocked for publishing laughably absurd headlines and stories.