This is a tale of two columns written by the same columnist. 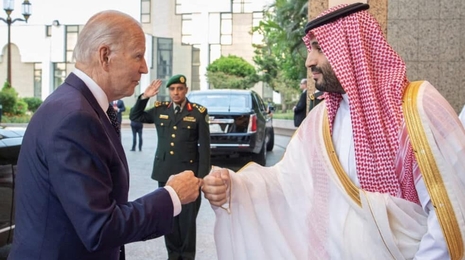 The new column is about Joe Biden dealing with presidents and you can see the fawningly sympathetic attitude of the column titled, "Cut Biden some slack. U.S. presidents have to deal with dictators."

On Friday, Biden was photographed — by the Saudis, naturally — engaging in that greeting with Crown Prince Mohammed bin Salman, popularly known as MBS. This was more than a little awkward, given that U.S. intelligence has concluded that MBS ordered the operation that led to the killing and dismemberment of Post contributing columnist Jamal Khashoggi. Biden once vowed to turn Saudi Arabia into a “pariah” for carrying out this murder, so the fact that he is now fist-bumping with MBS understandably provokes outrage.

I, too, recoiled at first from that distasteful image. But then I recalled that MBS is hardly the first, or even the worst, despot that U.S. presidents have greeted in similar ways. Harry Truman shook hands with Joseph Stalin, Richard Nixon with Mao Zedong — and both of those dictators had far more blood on their hands than MBS. Columnists can hurl thunderbolts of outrage from on high, but moral purity is a luxury that no leader of a great nation can afford. Every president has to pursue both America’s ideals and its interests — and often they are at odds.

In the case of the Saudis, we simply don’t have the luxury of completely isolating one of the world’s largest oil producers. If the United States won’t support the Saudis, Russia and China will — and they will care far less about human rights than we do.

...Sometimes there simply isn’t a perfect policy, and the best a president can do is try to pursue the least-bad approach. That’s what Biden is doing, and, while it might be morally satisfying to castigate him, I’m inclined to cut him some slack. 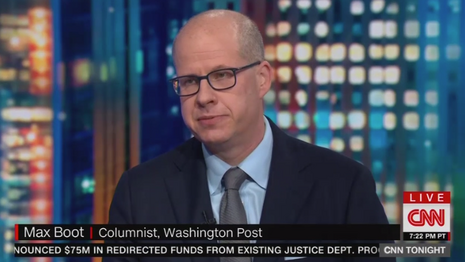 This compassionate understanding for why Biden had to deal with a dictator is utterly absent from Boot's angry attack upon President Trump in which no slack was cut on November 17, 2019. The title was "Trump’s corrupted foreign policy: Coddle the dictator, abuse the ally":

In the White House, President Trump was fawning over Turkish President Recep Tayyip Erdogan, a vicious anti-American dictator who has ethnically cleansed the Kurds in northern Syria, locked up his domestic critics and established close ties with Russia. “You’re doing a fantastic job for the people of Turkey,” Trump gushed. Of course he did: By Trump’s lights, this is how a leader should behave.

...Unless Trump is removed from office by either impeachment or election, he will continue to corrupt U.S. foreign policy on a hitherto unimaginable scale.

And the level of hypocrisy presented by Max Boot also seems to be on a "hitherto unimaginable scale."