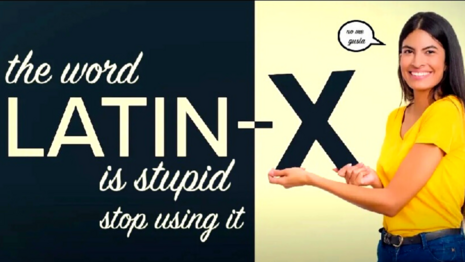 Apparently New Yorker contributing writer Graciela Mochkofsky  hasn't gotten the message yet, which has been repeated over and over again for the past few years, that a vast majority of the Spanish speaking community in the United States finds the incredibly awkward word "Latinx" to be both absurd as well as offensive.

In 2020, Washington Post reporter Jose A. Del Real wrote that "Users of “Latinx” are accused of being out of touch with working-class Latino communities and of practicing linguistic imperialism on the Spanish language, which, like French and Italian, is grammatically gendered."

Mochkofsky's Friday story, "A Different Kind of Bid to Win Over the Spanish-Language Media Audience," about a liberal network purchasing 18 Spanish language radio stations uses the mostly despised word "Latinx" a total of 21 times which threatens to throw more gasoline on the fire of existing controversy in the local Miami radio market.

Only one of those 18 radio stations is conservative talk -- Radio Mambi in Miami. This article doesn't do much more than fluff the purchase for the liberal New Yorker readership

Many local listeners of Radio Mambi are not happy with this sale as can be seen in the June 9 Miami Herald, "‘They are not going to shut us up.’ Cuban exiles vow to boycott if Radio Mambí is ‘silenced’". The fact that the liberal ivory tower New Yorker used the offensive "Latinx" 21 times to write approvingly of the radio sale is only sure to alienate the Radio Mambi listening audience even more.

So time now for the New Yorker inadvertent slaps in the face of the Spanish language radio listeners with the "Latinx" countdown starting with the story's subtitle, "A new company has acquired eighteen Spanish-language radio stations, serving ten of the largest Latinx-populated cities in the country."

And now on to the body of the article itself for the remaining twenty "Latinx" words that even Democrats have been warning clueless liberals to never, never use or risk losing even more of the Latino voting bloc.

...Such efforts are often purely commercial in nature—they seek to monetize the ever-growing U.S. Latinx population—and investments tend to not be sustained over time. Now a new set of investors has entered the field, with what it says is a long-term plan, and it’s creating some excitement in progressive Latinx circles.

Stephanie Valencia, an entrepreneur who was a special assistant to President Barack Obama, and Jess Morales Rocketto, an activist who worked with both Obama’s and Hillary Clinton’s Presidential campaigns, recently raised eighty million dollars to launch the Latino Media Network, a distribution and content-creation hub intended to help Latinx listeners “make sense of the avalanche of information” that hits them, Morales Rocketto told me. As a first step, the new company has acquired eighteen Spanish-language radio stations serving ten of the largest Latinx-populated cities in the country. The announcement comes more than two years into a national debate about the role of right-wing disinformation campaigns targeted at Latinx voters. Chuck Rocha, a Democratic Party strategist and former Bernie Sanders campaign adviser, called the purchase a “bold move” and told me that it was refreshing to see an effort “to stave off misinformation that is running rampant in Spanish radio.”

Radio remains a powerful medium among Latinx communities. “Radio listenership is higher among Hispanic consumers than among any other ethnic group. Ninety-five percent of Hispanic consumers tune into the radio in an average week,” Jessica Retis, who was recently named the director of the School of Journalism at the University of Arizona and is an expert on Latinx media, wrote in a 2019 report. (The national average for all listeners was ninety-two per cent.) According to Nielsen, last year more than a third of Latinx people listened to radio more often during the covid-19 pandemic than they previously did. A report on Latinx media that I conducted for the Craig Newmark Graduate School of Journalism at cuny found that, among the hundreds of stations serving Spanish speakers in the country, only thirty-seven produce original news content; most focus on music, sports, religious content, and talk shows.

Note that the name of the company that bought the radio stations is the LATINO Media Network, not the LATINX Media Network. Apparently Mochkofsky is so concentrated on shoving "Latinx" down the throats of her readers that she missed that interesting irony.

We are now almost at the halfway mark of the "Latinx" countdown with eleven still to go in the hilariously absurd overuse of the mostly shunned word.

More recently, a few radio stations, particularly in Florida, have been accused of waging disinformation campaigns among Spanish-speaking voters during Presidential elections, and have been blamed for abetting Republican gains in Latinx communities. Latinx voters were crucial to Joe Biden’s triumph in 2020, but thirty-eight per cent of them voted for Donald Trump, according to a 2021 Pew Research Center analysis, a ten-point increase when compared with 2016. In Florida’s Miami-Dade County, Trump’s upswing was more than twenty points, and he managed to win a county in the overwhelmingly Latinx Rio Grande Valley, in Texas.

...Valencia—who is also the founder of Equis, a firm focussed on raising Latinx civic participation, and who has researched how disinformation circulates among Spanish-speaking communities—was one of the prominent voices sounding an alarm about this shift. In a postmortem analysis of the 2020 elections, Equis concluded that the false narrative that the Democratic Party was embracing Socialism was “a national phenomenon” among Latinx voters: about forty per cent expressed concern about it.

...Among those most likely to worry about the spectre of Socialism were Latinx voters who consumed news from WhatsApp and right-wing media outlets.

...These stations reach some of the largest Latinx markets, including New York, Los Angeles, Miami, Chicago, Houston, Dallas, San Antonio, Las Vegas, McAllen, and Fresno—cities that are home to a large swath of the Latinx population in the U.S.

...But, he added, “the House campaign and the House races are doing just as bad a job as they have always done” with Latinx communities.

Almost done. And now for the grand finale of "Latinx" which seems to be reaching for a Guinness World Record for overuse in a single story...

Valencia and Morales Rocketto insist that the Latino Media Network is not a short-term political move but part of an ongoing investment in the Latinx community, and that the acquisition of the radio stations is just the first step in the development of a content-creation hub that will also include podcasts and YouTube production.

Since the "Latinx community" is almost non-existent because few have embraced the hated term, one wonders just how far this effort could possibly extend into the "content-creation hub." Did this ridiculously Latinx-ridden article already doom future efforts by the Latino (not "x") Media Network?

Note: There were actually a few sentences in the New Yorker story that did not include "Latinx." Not many but there were a few.