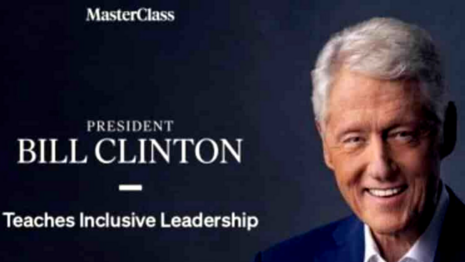 Remember last December when NBC's Sunday Today swooned over Hillary Clinton's drama queen performance in which she choked up while giving her 2016 victory speech that didn't happen due to her inconvenient loss to a certain Orange Man?

If you thought that was bizarre in a comedic way, perhaps you should enroll in her (and husband Bill's) MasterClass on politics since her speech shtick was part of the course.

If you want to get a preview of what kind of laughs you would be in for, Politico Magazine on Sunday reviewed the MasterClass course and revealed that rather than really teaching students much in the art of politics, it was in reality an exercise in vanity on the part of the two Clintons.

The MasterClass mocking by Calder McHugh begins with the Politico title, "The Clintons’ MasterClass On Vanity," and continued from there.

MasterClass certainly is in the learning camp, suggesting students can pick up professional tips from political leaders just like from designers or writers or sports stars.

But rather than reveal the secrets of success in politics it buries them under a load of platitudes. MasterClass skips over the whole question of how and why political leaders emerge to talk instead about more amorphous concepts like leadership and resilience. This leaves viewers with courses that are dressed up but empty. Without many concrete lessons to teach, save some bits on public speaking (there’s some bitter irony there too, as Hillary tells viewers to practice speaking in front of a mirror, and then lessons later says that she has never read her victory speech out loud), the Clintons resort to messages we’ve mostly heard before, maybe at a mid-budget hotel conference complete with a cold breakfast buffet. Make your bed in the morning. Stay organized. Define your own values. Find your own leadership style. Know your audience. Look for win-wins when negotiating.

Good observation by McHugh! How can Hillary claim that she never read her victory speech out loud (until her December performance) while telling readers to practice speaking in front of a mirror? He continued:

Unfortunately, rather than really explore the contours of their decision-making, the Clintons — who seem to not realize or not care that they’re in the stage of life when they can offer hard, revealing truths — are more concerned with molding their images. Part of Bill Clinton’s course makes it clear exactly how far into the Oval Office viewers really get.

"Exactly how far into the Oval Office viewers really get?" It wasn't intended to be cringe, but one could have certainly read it that way.

McHugh went on, alluding to "[t]he elephant in the MasterClass room" being "the result of the 2016 presidential election" and its subsequent "chang[ing]...of American political leadership."

Yup! The media guaranteed that Hillary would be the winner of that election for sure...until it didn't happen:

[T]he Clintons unintentionally teach other lessons. Set your own agenda. Insist on soft lighting. Mete out vulnerability in small doses. Never turn down a big check. Keep your thoughts on your public embarrassments private. Above all, protect your image.

And mainly, never turn down a big check.