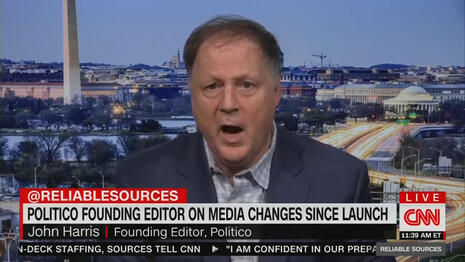 Is it time for Politico founding editor John F. Harris to don a jester's costume?  A week ago we saw the spectacle of Harris recommending that Joe Biden reverse his sinking political fortunes by trash talking. And on Thursday, he took yet more silly sauce to urge Chief Justice John Roberts, despite being sixteen years younger than the retiring Stephen Breyer, follow suit by no later than this summer.

Why? Of course we know the reason why but Harris does not want to come right out and state the obvious that he is a partisan liberal who wants to very conveniently shift the ideology of the high court to the left by Roberts retiring in order to have Biden nominate a leftist replacement for him.

Harris made what seems to be his weekly clown act in "Take The Hint, John Roberts — It’s Time For You To Retire, Too."

First Harris interprets something Roberts said seventeen years ago to mean that the Chief Justice should somehow retire real soon. Like soon enough for Biden to name a replacement and there is still time for a slim Democrat majority (with the Vice-President voting) to confirm a liberal replacement:

Judges are like umpires,” John Roberts famously said at his confirmation hearing as Chief Justice. “Umpires don’t make the rules, they apply them ... They make sure everybody plays by the rules, but it is a limited role. Nobody ever went to a ball game to see the umpire.”

...One way to hear Roberts’ pious words is as a gesture of respect. He knows the truth is more complicated. But he’s describing an ideal that right-thinking people should honor in theory, and judges and justices should strive at least to approximate in practice.

...The first interpretation is more fair to Roberts, with a tenure as chief justice in which he has valiantly tried to protect the reputation and independence of the court.

There is one sure way, however, that Roberts could prove he deserves the benefit of the doubt: He could join Justice Stephen Breyer in announcing his retirement at the end of the court’s term this summer.

Or he could wait until a Republican occupies the Oval Office with a Republican majority in the Senate but that is something that Harris definitely won't be proposing:

This surprising act would be most likely to advance what the Chief Justice says he wants — a revival of public faith in the Court’s institutional legitimacy, and that its rulings flow from something other than the personal agendas of individual justices or the partisan machinations that placed them in their jobs.

Yeah, no partisan machinations exist under the Democrats which is why Roberts should leave now according to the Harris clown act poorly disguised as noble political analysis.

And finally, this parting shot from Harris at Roberts if the Chief Justice does not take his advice to self-sacrifice for the sake of a more liberal Supreme Court:

...let him stay in his job another 17 years and fully earn the cult-of-personality status he says he doesn’t want. Until then, though, people are entitled to roll their eyes during John Roberts’ sermons about the purity of the judicial branch.

Thank you for that smear Mr. Founding Editor. It pretty much guarantees that Roberts will not be taking your clownish advice.