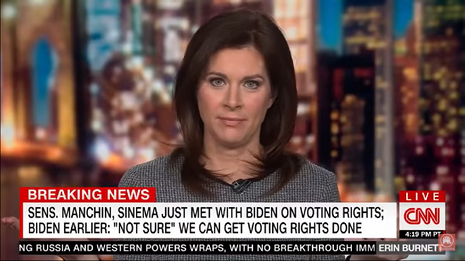 Uh-oh! Will CNN's Erin Burnett face castigation  from her colleagues for daring to break away from the "Solidarity journalism" of her peers? One of the dogmas of such journalism is that the so-called voting rights bills being pushed by Joe Biden and the Democrats is that many states are currently attempting to suppress the ability of voters to cast their ballots.

On Thursday, Burnett committed the heresy of breaking out of the Liberal Borg long enough to contradict the narrative being pushed by CNN and much of the media on this issue. Here is Burnett's reaction to Biden's dogmatic January 11 speech on the topic in Atlanta:

In fact, back in November, New Yorkers voted down a constitutional amendment that would allow anyone to request an absentee ballot for any reason at all by 55 percent to 45 percent, in an overwhelmingly Democratic state.

And let's take a look at early voting. Georgia, the new law, the law that sort of Abraham Lincoln versus Jefferson Davis allows for 17 days of early voting, New York only has nine.

Now, I'm not saying this to say that vote reforms are not needed, not at all. It's just to point out that it isn't as simple as saying all GOP-backed laws are segregationist and racist. That is too simplistic.

Therefore if it is "too simplistic" why take the huge step of federalizing elections in the states? That is the ultimate conclusion to be gotten from Burnett's analysis of the reality of the voting situation in the states.