A former general who has appeared frequently in the media to warn of a coup by elements of the military against Joe Biden has a long highly partisan history of extreme hostility towards Donald Trump.

Paul Eaton appeared on a number of media outlets last month, including CNN's Situation Room with Wolf Blitzer on December 20 to discuss his Washington Post op-ed he wrote with two other retired military officers. Blitzer cued him up for a nearly two-minute speech.

The intent of the op-ed is to bring up the possibility that the Armed Forces of the United States could be infected by what we are watching develop in the Republican Party.

We tend to be a conservative lot. The military installations have a constant feed of Fox News going in there. And what we have got is an opportunity for the Republican Party, 39 percent who don't believe that President Joe Biden is the duly elected president of the United States, 17 percent of the Republican Party espoused the use of violence in a future election.

The December 17 Washington Post op-ed that Eaton was referring to was the one he wrote with former army generals Antonio Taguba and Steven Anderson, "3 retired generals: The military must prepare now for a 2024 insurrection." 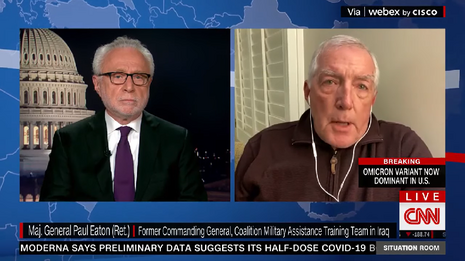 We are chilled to our bones at the thought of a coup succeeding next time. One of our military’s strengths is that it draws from our diverse population. It is a collection of individuals, all with different beliefs and backgrounds. But without constant maintenance, the potential for a military breakdown mirroring societal or political breakdown is very real.

The signs of potential turmoil in our armed forces are there. On Jan. 6, a disturbing number of veterans and active-duty members of the military took part in the attack on the Capitol. More than 1 in 10 of those charged in the attacks had a service record. A group of 124 retired military officials, under the name “Flag Officers 4 America,” released a letter echoing Donald Trump’s false attacks on the legitimacy of our elections.

And after casting aspersions upon much of the military as potential coup plotters in the future the generals recommend military personnel be subjected to woke re-education, or what they call a "civics review."

What you don't find out from either Wolf Blitzer or others in the media interviewing Eaton is his history of hatred of Trump and obvious partisanship on behalf of the Democrats. One example is Eaton's praise for Biden's Afghanistan withdrawal debacle that even disturbed some Democrats:

For lo so many years I have looked for a President with guts. A buck starts here kind of person. And now we get Joe Biden. Thank god for you Sir. Thank you for your strength and guts. You did the right thing. Well done Mister President. Great speech BTW.

Ironically, with all his talk of a coup, Eaton was a member of the Transition Integrity Project which war gamed how to remove Donald Trump from office after the 2020 election as reported by the August 6, 2020 USA Today, "Experts held 'war games' on the Trump vs. Biden election. Their finding? Brace for a mess."

..."Out of this war game, we witnessed role-players exercise power nakedly," said Retired Maj. General Paul Eaton, a military officer of 30 years and a senior advisor for Vote Vets, a progressive-aligned group that advocates for military veterans.

And for all his talk about the danger of the military being politicized to oppose Biden, guess who urged military leaders in 2018 to speak out against President Trump?

Admirals and Generals - if you don’t follow Admiral McRaven’s example in his condemnation of @realDonaldTrump you align with America’s most disgraceful President. Close ranks with McRaven. Continue to execute your oath to support and defend the Constitution of the United States.