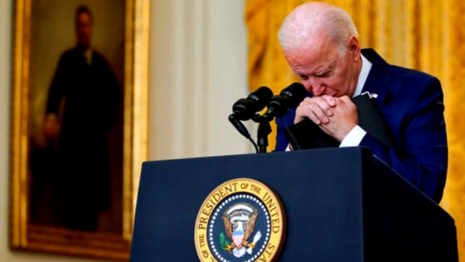 What does it say about a Democrat president when, less than a year into his term, a liberal commentator is already searching around for his possible replacements in the next presidential election?

Combine President Joe Biden's age (he'll be 82 shortly after the 2024 election) and his ongoing political struggles (he's mired in the low 40s in job approval) and you get this: a series of stories examining whether Biden runs again and, if not, who might take his place.

Not exactly a vote of confidence in Biden by Cillizza. However, the possible Democrat replacements he mentions are also, well, wanting.

Kamala Harris: She's undoubtedly struggled as vice president but she's still the most likely Democrat not named Biden to wind up as the Democratic nominee in 2024.

Despite the fact that Joe Biden and his wife now both obviously despise her? And don't forget that the failed Border Czar's popularity with the public has sunk even lower than Biden's.

Pete Buttigieg: The most naturally talented candidate in the 2024 field, "Mayor Pete" has also been front and center selling Biden's infrastructure bill.

"Most naturally talented candidate in the 2024 field." What planet is Cillizza living on? Mayor Pete is our best-known Transportation Secretary because he is so inept that he went MIA for weeks while the worst supply chain crises in our nation's history built up.

As long as you're just listing the last cycle's losers, Cillizza included Senators Elizabeth Warren and Amy Klobuchar, whose joint endorsement by The New York Times counted for precisely nothing.

The rest of the candidates on Cillizza's 2024 contender list just makes you scratch your head in wonderment. Just the governors on the list makes one want to gasp before bursting out laughing. There's Gretchen Whitmer (endorsed by the 12 FBI informants in her alleged kidnapping case?), Phil Murphy (who barely won what was supposed to be an easy re-election victory in New Jersey), and J.B. Pritzker (from a state rated as one of the worst to do business in.)

Even a possible future governor on the Cillizza's list of Biden replacements is utterly laughable: Stacey Abrams.