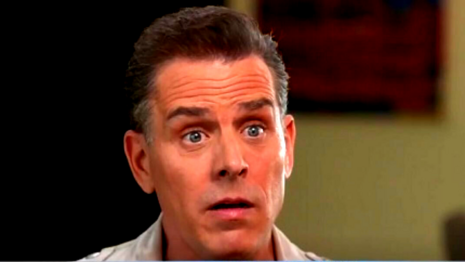 Imagine being the Los Angeles Times assignment editor last week and you find out that despite pledges that Joe Biden's son, Hunter, would have no contact with the people buying his art, he would be rubbing shoulders with them at his glitzy art show in Hollywood. In addition, among the attendees would be Los Angeles Mayor Eric Garcetti whose nomination as ambassador to India has been stalled in the Senate. So the editor looks at all this and decides to not send anyone to report on that rule-breaking event.

If that sounds absurd, the reason is because it is obvious the Times went to extreme lengths to avoid reporting on a situation embarrassing to Democrats. Fortunately we did get some in-depth reporting on the Hunter Biden art show from a source thousands of miles and an ocean away, the U.K. Daily Mail.  The extended title on their Wednesday story alone reveals the blatant ethics breach of that art show: "EXCLUSIVE: Hunter Biden is seen hanging out with star-studded potential buyers of his half-million-dollar art at LA's Milk Studios debut show, despite White House claims he will have no idea who is buying his pieces."

It wouldn't have been an "exclusive" story if the Times assignment editor had been willing to breach the Democrat protection wall. However, since the Times laughably failed to do it's obvious job, let us read some of the juicy details from the Daily Mail:

Video and photos exclusively obtained by DailyMail.com show Hunter and his gallery manager Georges Bergès entertaining around 200 people at the famous Milk studios in Hollywood on Friday, including his wife Melissa and two of his daughters, 27-year-old Naomi Biden and Maisy Biden, 20.

Around 200 invites for the tightly-policed event went to a host of Los Angeles glitterati and potential buyers of Hunter's art, the prices for which range between $75,000 and $500,000.

So did Mayor Garcetti buy a piece of Hunter's art for between that $75,000 and $500,000? Don't hold your breath waiting for the Los Angeles Times to find out.

The eye-watering sums, unheard of for a debuting artist, have prompted serious concerns by former White House ethics chiefs, who fear that money for the works could be used as proxy political donations or to curry favor with President Joe Biden and his family.

Art critics say pieces by an untrained and debuting artist like Hunter would not usually fetch such high prices, and believe that his last name is significantly inflating their price.

Two former White House ethics chiefs have also voiced concerns that buyers could try to curry influence with the president by buying his son's work for inflated sums.

Everybody but the Los Angeles Times is still curious if the desperately aspiring ambassador to India now owns a piece of the Hunter Biden art collection.