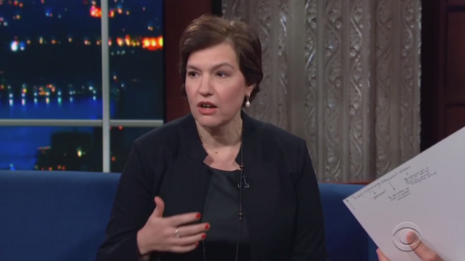 Last year, New Yorker columnist Susan Glasser was so depressed/exhausted by Trump that she invented, with the help of a friend,an unpronounceable German word to describe Trump, "Trumpregierungsschlamasselschmerz." She delighted Stephen Colbert as she explained: "Trump, you got that. Regnorran is government. Schlamassle is what it sounds like, craziness. And then schmerz, is like soul-sickness. So it's like Trump government craziness soul-sickness."

There were celebrations aplenty at MSNBC and similar places where Trump-loathing runs rampant when it was announced that the Trump Organization CFO Alan Weisselberg was indicted for not paying taxes on company fringe benefits. It was fervently hoped that Weisselberg would "flip" and bring down Donald Trump as a result.

So it is interesting that Glasser is now warning liberals to not make fools of themselves by spiking the victory football in the end zone yet again. Her warning came on Thursday in the aptly titled, "The Persistent Fantasy of a Trump Knockout Punch."

For the past four years, Donald Trump’s critics have harbored a persistent fantasy that there would be one definitive moment when he would finally be subject to the accountability he so richly deserves. Each new Trump crisis—and there were many—offered the hope of some redemptive, indisputable, unambiguous end to Trump that would conclude this sorry chapter in American politics. It never happened. Bombshell investigative reports about his failure to pay taxes and his secret hush-money payments and his crooked dealings came and went. The Mueller report and Trump’s impeachment over the “perfect” phone call with Ukraine’s president came and went.

And yet they continue to celebrate the "walls are closing in," based on the latest plot by Democrat prosecutors in Manhattan:

The flickering dream of a final Trump purge from public life took slightly more tangible shape on Thursday, in a New York City courtroom, when Trump’s tightly controlled personal company, the Trump Organization, and his longtime financial chief, Allen Weisselberg, were indicted on criminal tax charges stemming from an alleged fifteen-year-long scheme, “orchestrated by the most senior executives” of the Trump Organization, as the prosecutor put it, to evade taxes. The theory of the case appears to be to pressure the seventy-three-year-old Weisselberg to turn on Trump, his boss of decades, by threatening him with the prospect of prison time.

Stand by for the buzzkill.....

Second-guessing, however, began immediately—even before Weisselberg appeared in handcuffs in court on Thursday afternoon and the charges were unsealed. Pundits, of whom there are many, said that the case was weak, that this kind of charge was rarely brought, that Trump himself would escape sanction. “I’m sure the NY DA and AG understand that, from an optics standpoint, the first charges they bring against the Trump Organization can’t be petty, rarely-prosecuted crimes,” David Axelrod, the Democratic strategist, tweeted on Wednesday. “Don’t they?” Soon enough, this is exactly what Trump’s lawyers argued once the charges were filed.

David Axelrod neglected to mention that the charges should also not appear to be politically motivated. And for evidence of that, Weisselberg's attorneys merely need to cite the words of New York State Attorney General Letitia James, who's teamed up with the Manhattan DA. She's as fair and objective toward Trump as a typical MSNBC host.