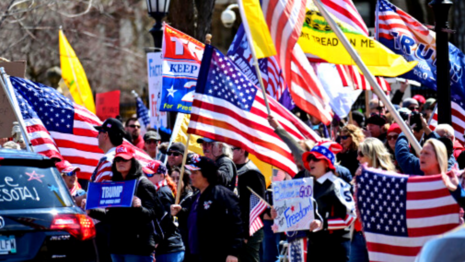 Watch or read the mainstream media news and a constant theme they have been promoting incessantly since the election (and well before that) is of a divided Republican Party engaged in a civil war. Well, longtime political reporter and Politico columnist Jeff Greenfield took a look at that claim and described it as wishful thinking hogwash.

Although Greenfield dislikes Trump and had plenty to trash Republicans on, he has been around long enough to know how easily liberals can be deceived into the smug comfort of false hope by the media.

The very title of his column published on Wednesday reflected that opinion, "A GOP Civil War? Don’t Bet On It":

Among Democrats painfully aware of their tiny or non-existent margins in the House and Senate, the prospect of a divided Republican Party offers hope that this “civil war” will redound to Democrats’ advantage in 2022.

They shouldn’t be so sure.

First, beyond a few spats that make headlines, it’s getting harder to detect any serious division among rank-and-file Republicans.

Second, and more significant, history is littered with times that critics on the left, and in the pundit class, were positive the Republican Party was setting itself up for defeat by embracing its extremes ... only to watch the party comfortably surge into power.

Again, Greenfield isn't a conservative, MAGA supporter, or even a Republican, so he had to work in some digs at the GOP, griping about unfair "structural advantages" like GOP "gerrymanding," the Electoral College, state legislatures being somehow unfair, "statistically 'wasted' votes in landslide Democratic districts," and the premise of the U.S. Senate.

Ah, there's the leftist disgust for the right that we all can recognize!

Greenfield went back to the cold, hard truth for his fellow lefties, warning them that support for Trump "may actually enhance, rather than lessen, its chances" at returning to power, adding: "What we’re seeing isn’t a civil war. It’s a purge, and there’s every reason to believe it will work.

And yet, as Greenfield points out, the idea of a divided GOP continues to be promoted by the media such as the New York Times.

This is not the conclusion you’ll reach if you follow much of the mainstream press. A New York Times story on Saturday about Trump’s hold on the GOP quoted former Rep. Barbara Comstock, former Sen. Jeff Flake, GOP consultant Sarah Longwell and Republican strategist Scott Reed, all warning of the political danger of a Trumpcentric party. These are estimable public figures, none of whom remotely speaks for the Republican base. For the past few weeks, much media attention was focused on Michael Wood, the 34-year-old veteran running for a Texas seat with a message that the Republican Party had to move away from Trump. He wound up finishing ninth, with 3 percent of the vote.

...A far better picture emerges when you consider the behavior at the grassroots. From one end of the country to the other, state and local Republicans have spoken with one voice.

...In state after state—Louisiana, North Carolina, South Carolina, Illinois, Kentucky, Nebraska, Michigan, Washington—local Republican parties are rallying around the ex-president, and censuring those who dare to critique him. If there is any counterweight to this mass impulse, if there are signs of any activity on the other side of this “civil war,” it is happening at a level so low as to be invisible.

But don't worry, liberals. Much of the media will continue to make you feel much better with assurances that the GOP is tearing itself apart.