Out of Control Politico: Cancel Andrew Yang for Appearing on 'Right-Wing' Joe Rogan? 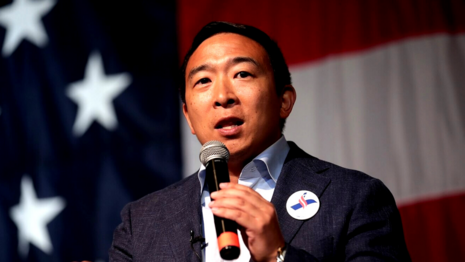 Did you  know that Joe Rogan who supported Bernie Sanders for president is the host of a "right-wing" show? Yes, and anybody who appears on Rogan's show, now defined as "right-wing," is suspect and worthy of being cancel cultured out of any participation in the Democrat electoral process.

Such was the case with New York City mayoral and former presidential candidate Andrew Yang. Even though he is a noted supporter of Universal Basic Income which would be considered a leftist and even socialist idea, he is to be canceled out of political consideration according to Politico reporters Tina Nguyen and and Sally Goldenberg for committing the horrid thought crime of appearing on shows hosted by those with whom he might disagree.

It is not surprising that Tina Nguyen was one of the reporters since she has previously displayed her totali-tilt attitude such as last November when she, despite being supposedly a member of the press, criticized Parler for its lack of censorship.

Nguyen returns to form with her woke shot on Tuesday over "How Yang charmed the right on his road to political stardom."

Andrew Yang’s road to fame was paved with right-wing podcasts.

Before he joined the New York City mayor’s race in January or even appeared on a presidential debate stage during the Democratic primary, Yang reached an audience of millions through an unconventional venue: shows that promoted a strongly anti-progressive point of view.

In the definition of the woke reporters, a "strongly anti-progressive point of view" can even include Joe Rogan whose thought crime is that he interviews people with a diversity of opinions which is now taboo according to the Social Justice journalists which prevail at places such as Politico.

During one interview last May, Yang said, “There are many elements of Trump voters that I completely get and empathize with” before describing people who had become disaffected with corruption and “checked out of politics.”

Intolerable! He must get his mind right with a certain Mr. O'Brien in Room 101.

Yang also made appearances on The Ben Shapiro Show, The Joe Rogan Experience, and Tucker Carlson Tonight to promote his candidacy. By then these shows had built a reputation as highly critical of progressive policies and “woke” culture — a viewpoint that had built them a collective, nationwide audience of millions.

Doesn't Yang know that political diversity is no longer the least bit tolerated? You cannot be allowed to associated in anyway, including being interviewed, with anybody whose views don't fall into line with strict liberal dogma.

Yang’s past comments hint at a general skepticism of large government — a contrast to outgoing Mayor Bill de Blasio, who has expanded the city workforce and ballooned the budget.

Heresy! We must cast Yang asunder and no longer allow him a forum  in the liberal Borg!

When Yang appeared on Rogan's show in February 2019, he met 6 million listeners. “Happily, everybody who’s a fan of yours, which is apparently everybody, now knows that I’m running,” he told Rogan.

Gasp! Please break out the smelling salts, Tina! Yang's praise of Joe Rogan obviously disqualifies him from running for any office as a Democrat, at least according to the current Politico mindset.