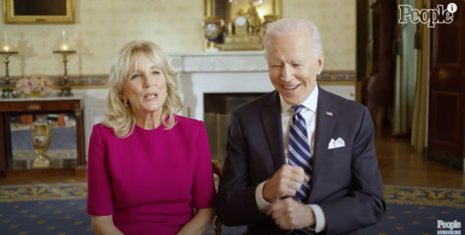 Politico, acting in its role as flack for the Democrats, presented a politically weaponized Valentine to Jill and Joe Biden, appropriately on Valentine's Day. It wasn't just the fact that the author, Quint Forgey, went full gush over the couple's "PDA" (Public Displays of Affection) that many would object to. It was the fact that he weaponized the Jill and Joe "PDA" against the one whom the Democrats, the media, and Jill and Joe Biden can't seem to get out of their minds. Of course, I am referring to none other than President Donald Trump who apparently continues to haunt their every waking moment as well as causing them nightmares while sleeping.

The weaponized love gush begins with the title, "‘It just symbolizes everything’: Bidens bring presidential PDA back to the White House" and continues on into the subtitle, "Historians and relationship experts agree: The first couple’s romantic gestures aren’t just genuine — they’re restorative."

On a mission to rebuild institutional norms and help heal a hurting nation, Joe and Jill Biden are trying something novel after four years of the Trumps: a little tenderness.

The Jill and Joe love story kicks off with the very first sentence jabbing the Big Bad Orange Man.

After that kickoff, Forgey managed to go two whole sentences without mentioning that certain someone who continues to live in his mind until.....

And although Joe and Jill Biden’s shows of warmth are just the latest in a long history of presidential PDA, they are even more pronounced in contrast to Donald and Melania Trump — whose sometimes chilly public interactions shattered the steady cultural progression of first couples growing increasingly comfortable expressing affection in front of the cameras.

Most of the rest of the Valentine story continues in the mush mush gush gush vein, with minor snipes at the Trumps, until the inevitable relapse to the real point of the whole saccharine effort:

Since Bill and Hillary Clinton, the presidency has seen a series of first couples — George W. and Laura Bush, Barack and Michelle Obama, and Joe and Jill Biden — who demonstrate that American culture is “past all the taboos” that were formerly associated with PDA, Perry said.

The glaring exception is the previous first couple, Donald and Melania Trump, whose frigid public encounters interrupted what had otherwise been a natural integration of PDA into everyday presidential behavior.

In that sense, the Bidens’ displays of affection appear somewhat foreign after the last four years, even though they represent yet another return to the norms of past administrations that the new president repeatedly pledged to rehabilitate on the campaign trail.

“It’s comforting. It’s warm. It’s genuine,” Perry said. “And so if you layer the Covid issue, our divided country [and] the violence in our country upon the contrast with the Trumps, it just symbolizes everything.”

This isn’t the first time. Way back in 2000, the not-yet-disgraced Matt Lauer fawned over PDA from Al Gore to this then-wife. (They later divorced.) Here's some of the fawning:

“Let’s talk about what they are now calling, Mr. Vice President, ‘The Kiss’. You heard about ‘The Catch’ in that football game, this is ‘The Kiss.’ You really planted one on Mrs. Gore at the beginning of your speech there. What were you thinking?”
“Were you trying to tell the American people that you’re really a kind of emotional guy?”
“Well after watching that kiss I know how you survived 30 years, Mr. Vice President. Way to go! It’s nice talking to you.”
— Today co-host Matt Lauer to Al Gore, August 21, 2000, the Monday following his convention speech.