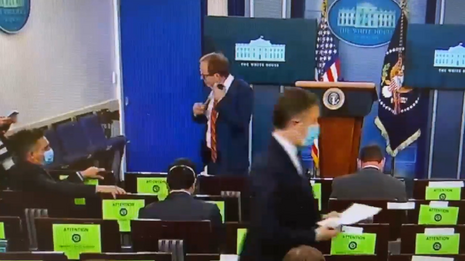 Perhaps ABC's Chief White House correspondent Jonathan Karl, who has a history of mask shaming, should be granted a pardon along with the turkeys pardoned by the President.

Why? Because despite his past history of hectoring others about wearing masks, Karl himself was caught removing his own face mask on Tuesday in the White House Briefing Room.

If Karl thought the cameras were off he was wrong because at least one of the cameras caught the mask criminal in the middle of his heinous act.

ABC’s @JonKarl thought all the camaeras were off, so he removes his mask while still in the White House briefing room, proving for the millionth time the media hacks are the ultimate hypocrites. pic.twitter.com/2ynih0Nbgp

What made Karl's mask removal especially egregious is the fact that he has a record of getting up on a moral high horse to lecture others about removing their masks. Once such act of mask shaming was directed towards Fox News' John Roberts on May 11.

Roberts' response was "Facts - I was quietly seated more than 6' away from the closest person (adhering to CDC social distancing guidelines). When the press conference began, I put mask on. So - what, exactly is the basis for this petty effort at shaming????"

Hmmm... It will be interesting if Karl will use the Roberts defense to plead his case for a turkey pardon.

A more recent example of Karl committing blatant mask shaming was in October when he castigated White House Chief of Staff Mark Meadows for not wearing a mask outdoors.

Mark Meadows says the President is experiencing minor symptoms ... as he speaks to reporters at the White House without wearing a mask pic.twitter.com/10utj5WMBO

It therefore seems that Karl needs to be pardoned for at least two counts of mask shaming.

Exit question: Who do you think is more of a mask shaming hypocrite? Jonathan Karl or CNN's Kaitlan Collins?