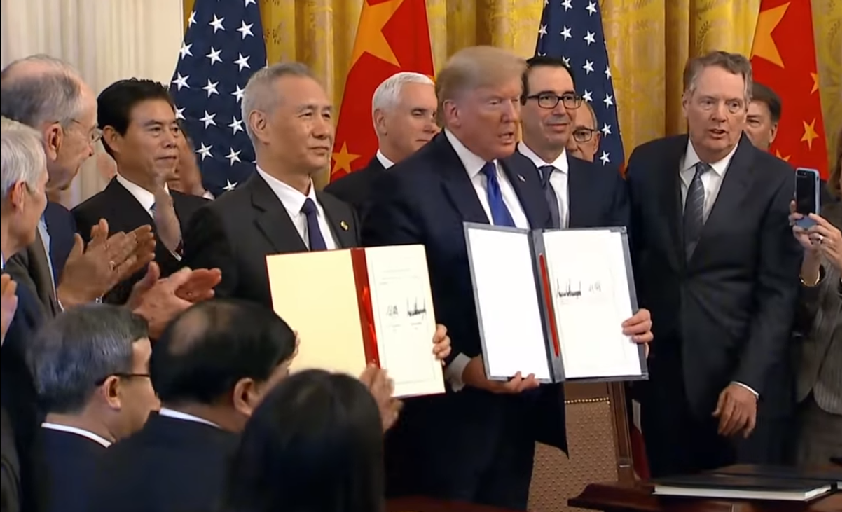 If you still didn't get the Politico message that the trade deal is supposedly about diverting attention away from impeachment, Kumar emphasizes that talking point in the very first sentence:

On the day the House voted to officially send its articles of impeachment to the Senate, President Donald Trump grabbed attention with a 75-minute White House ceremony where he boasted that a partial China trade deal would be “a major step for world peace.”

Kumar provided the color that impeachment was on television while Trump lamely attempted to change the subject. This is the opposite of what the press did during the Clinton impeachment. Back then, impeachment was the distraction, as Clinton did all the important presidential business, like the economy.

That was followed by her image of Trump "bragging."

In front of hundreds of invited guests, Trump took a victory lap — bragging that he had completed the first part of a long-sought trade deal with China that had, at many times, appeared elusive.

Much of the rest of the article consists of a combination of Kumar downplaying the importance of phase one of the trade deal as well as her assertion that the deal, which was in the making for a couple of years, really served to draw attention away from impeachment.

...Trump has claimed victory on building a wall on the southern border, despite only erecting a few miles of a new barrier. He has touted success on reducing North Korea’s nuclear ambitions, despite negotiations going cold. And he has recently been making the argument that he “saved” elements of the American healthcare system, despite failing to implement his preferred plan.

Still, no issue creates more suspense for Trump in 2020 than the economy. With the business community fretting about a China trade war-fueled recession, Trump must signal that he’s making progress on avoiding an economic downturn.

This is where you marvel at the moving goalposts of the media. America has record-low unemployment, including for minorities. But for reporters, Trump "must signal he's making progress on avoiding a downturn?"