Vox: 'Clinton Foundation Was a Kind of Modern Political Machine' 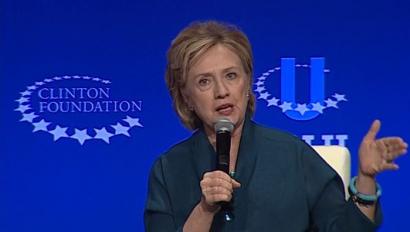 Vox and some other liberal outlets seem to have a new shtick going. They know that they can't portray Hillary Clinton and the Clinton Foundation as ethical so they admit that  there was  perhaps a smidgeon of corruption there. Having given ground on that Vox then proclaims that even though there were problems in the past, the promise by Hillary to reform the Clinton Foundation IF she is elected president is a very welcome development.

Matthew Yglesias of Vox concedes that perhaps there were problems with the Clinton Foundation in the past such as being "kind of a modern political machine."  However, before Yglesias makes his ethics concession, he first rejoices that finally, finally the Clintons have seen the light by promising to reform the Clinton Foundation IF Hillary is elected president.

Bowing to common sense and good judgment after a years-long effort to do otherwise, Bill and Chelsea Clinton announced today that their foundation will massively scale back its undertakings if Hillary Clinton becomes president — shutting down the signature Clinton Global Initiative and transforming itself into a much smaller nonprofit focused on a narrower range of ex-presidential undertakings like the Clinton Presidential Library. This follows — and greatly expands upon — the news that leaked last week that the foundation would stop accepting donations from foreign governments and corporations.

Hurrah! The Clintons have promised that their Foundation will be massively scaled back...IF Hillary is elected! Got that? You must elect Hillary as president for the Clinton Foundation to operate within ethical bounds. And if not...well, you draw the very obvious conclusion.

Of course, this latest ploy was forced upon them since their original gimmick didn't work as Yglesias explains:

That news, which the Clintons clearly hoped would be greeted as welcome by the press, instead played very poorly. After all, conceding that there was something potentially corrupting about Clinton Foundation fundraising while saying it would continue until Election Day sounded more like a Labor Day special on political corruption rather than a move to curtail it. It also naturally raised the question of why corporate money would be viewed as corrupting but donations from rich individuals would not.

Okay, so Plan A was a big flop but Plan B is beautifully designed to fool, uh I mean placate the public IF (and only if) HIllary is elected president.

The move to drastically scale back the foundation — and to try to find new homes for its main undertakings — addresses the problems in a much more dramatic way by simply reducing the scale of the fundraising that will be done.

Yup! The Clinton Foundation will scale back but only IF Hillary is elected president. Got that? And if you don't elect Hillary well, sorry voters, you're going to be stuck with what is described in the article as "a kind of modern political machine" with all the ethics you would expect of such an organization.

Isn't this known as "pay to play?"

... if you want to defend the operation on machine terms, then you would need to actually mount the defense. The Clintons’ grudging, day-late, dollar-short concessions to the viewpoint that the foundation is an unacceptable conflict of interest prevent them from mounting a coherent argument in its favor while also failing to conform to modern ideas about proper political conduct.

But now we have the Plan B magic wand. Just wave it and all will be well with the Clinton Foundation...IF Hillary is elected president.